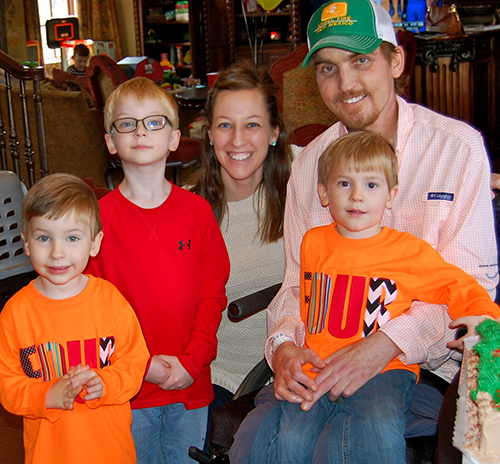 Laura Akins
Hunter Hanner is missing months of his life — specifically October, November and December of 2014 — when he was completely numb and trapped inside his own body.
A longtime member of the Southern Hills Church of Christ in Abilene, Texas, Hanner spent the past six months in a Dallas hospital fighting a paralyzing disease called Acute Inflammatory Demyelinating Polyneuropathy. 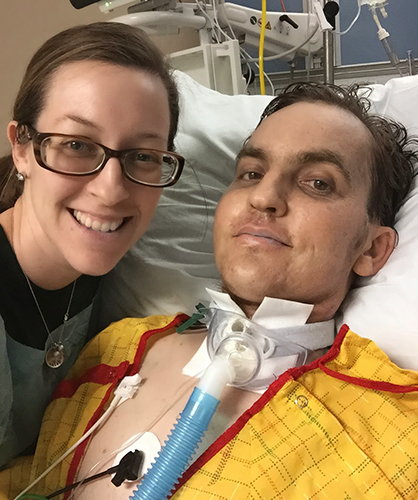 For months, Jennifer Hanner divided her time between helping her husband in the hospital and being at home with their three children. (PHOTO PROVIDED)
But AIDP — characterized as rapid-onset weakness of the limbs usually triggered by an infection, affecting one in 100,000 people annually — isn’t the only rare disease Hanner has had to battle in his life.
As a 2-year-old in 1984, he was roughly the 100th person in the world to be diagnosed with Chronic Granulomatous Disease, or CGD, an inherited condition causing the immune system to malfunction, leaving his body susceptible to numerous infections.
Doctors said he wouldn’t live past the age of 7. He’s now 32 and completely CGD free.
Hanner, who works in sales at family-owned Hanner Chevrolet, married his high school sweetheart, Jennifer Hathorn, in 2003. By 2011, they were expecting twins.
One afternoon, Jennifer Hanner received an e-mail about cord blood banking, which allows doctors to save the stem cells found in a baby’s umbilical cord to be used in the treatment of a wide range of conditions. One of the disorders cord blood claimed to treat was CGD.
“That e-mail was a God thing,” Hanner told The Christian Chronicle. “We prayed that God would either close the door or just keep opening doors. And he kept opening the doors… so we went for it.”
His CGD specialists didn’t go for it, but the discussion opened doors for them to pursue other avenues of treatment, including a bone marrow transplant. He needed a perfect match — extremely hard to find.
After a year and a half of prayer, Hanner checked into the Methodist Hospital in Houston on April 16, 2013, to begin chemotherapy. Ten days later, he received the bone marrow transplant. 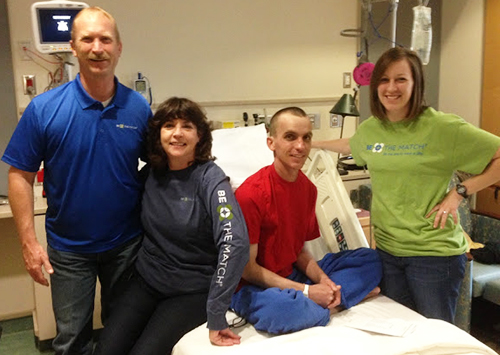 Parents Mark and Jana, along with Hunter and Jennifer, show off their Be the Match shirts on transplant day. (PHOTO PROVIDED)

“The transplant took well and they let me out of the hospital,” Hanner said. “But 40 days after the transplant my body started attacking my blood cells. Since then, I’ve had four or five autoimmune responses, with the latest one being the worst.”
“The worst” came in the form of the paralyzing AIDP.
Hanner was flown to Zale Lipshy University Hospital in Dallas in September 2014, where he spent months fighting and praying for his life.
“I remember having crazy dreams,” Hanner said. “I was pretty sure I was dead at that point. I could see ‘the light,’ so to say.
“I prayed to God, ‘I don’t want to die. I have lots to do. Don’t be finished with me yet.'”
God heard his and all of Abilene’s prayers. Hanner was released in March 2015.
More than 300 church members lined Antilley road in Abilene to watch as Hanner and his family were escorted home by local law enforcement.
“The people came into view and it was unbelievable,” Hanner told the Chronicle. “I had tears of joy for several miles on the last leg of our journey home, seeing the faces of those who had prayed us through this transplant.” 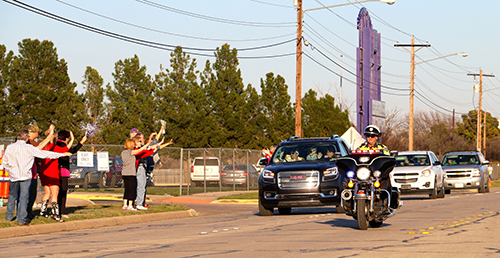 Southern Hills Church of Christ members waved as the Hanner family arrived in Abilene. (PHOTO PROVIDED)
But for Hanner, a full recovery is not enough.
Serge Gasore, friend and founder of Rwanda Children, a nonprofit home for vulnerable and at-risk children in Ntarama, has been so impressed with Hanner’s relentless hope in God, the he and his board of directors decided to dedicate the newest cluster of children’s homes in Hanner’s name.
“I have witnessed not only his great faith and trust in God, but also the wonderful love and compassion his family provided him,” Gasore said. “The Hanners’ Christlike example of faith, trust, love and compassion is very much in keeping with what I want to be able to share with vulnerable children in my country through the ministry of Rwanda Children.”
The Hunter Hanner Community of Hope will consist of 10 new homes — through a campaign called “Build A House, Create A Home.” 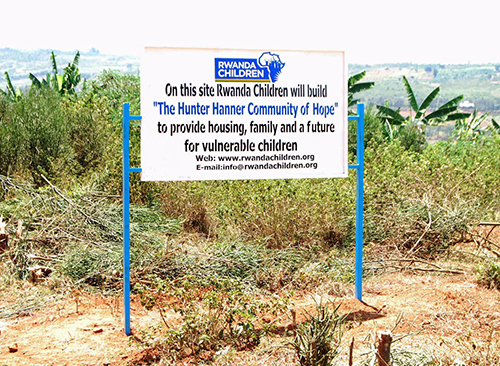 (PHOTO PROVIDED)
“Hunter and I are just two ordinary people,” Jennifer Hanner said in a blog post. “But it’s beginning to be more clear to us that God had a purpose for the rest of Hunter’s life and it’s not to just sit back and say ‘Thanks God for all you’ve done for us.’
“We would never seek to have Hunter’s name recognized on a community of houses,” she continued, “but believe that God will be glorified through Hunter’s story of healing.”