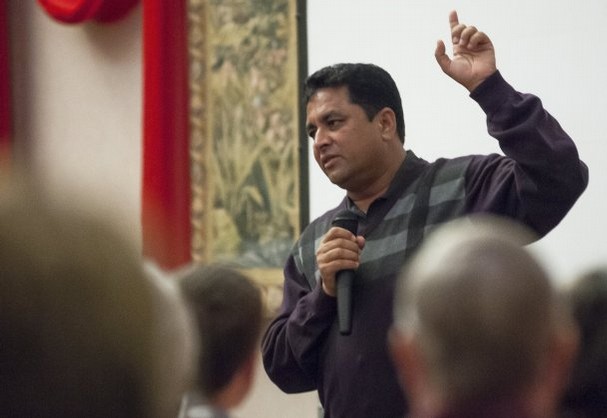 Ramesh Sapkota speaks about his personal fight against sexual slavery and the Eternal Threads movement at Highland Church of Christ. (Photo by Daniel Gomez, via www.reporternews.com)

When Ramesh Sapkota goes home to Nepal in a couple of days, he will take a plaque naming him an honorary Abilenian, plus a week’s worth of pleasant memories.
The people he encountered in Abilene may have gained even more. Sunday night, Sapkota, who lives in Katmandu, was honored at a dinner at Highland Church of Christ, his last meeting with a large group of Abilenians before heading home.
Mayor Norm Archibald presented Sapkota with a beautifully engraved plaque making Sapkota an honorary citizen of Abilene.
“We are proud to welcome you,” Archibald said.
Sapkota is in Abilene as a guest of Linda Egle, founder of Eternal Threads, a nonprofit organization that sells clothing and other goods made by women in impoverished countries. Proceeds go back to the women, who use the money to support their families.
Several years ago, Egle partnered with Sapkota, founder of Kingdom Investments in Nepal, to help Sapkota in his fight against the sex trafficking trade between Nepal and India.

Read the full story.
Sapkota told me the story of how he became an anti-slavery crusader when I visited him in Nepal in 2012. Growing up in Kathmandu. As a young man in Kathmandu, he remembers overhearing an argument between a woman and a man in an alleyway. The woman had been sold into slavery by the man. Somehow, she had clawed her way out of the brothels of Mumbai, India, and returned home. Humiliated, devastated and defiant, she found her trafficker and confronted him. Sapkota wondered how many more women didn’t make it back.
Egle, a member of the Highland church, was honored by MedAssets, a company that provides management services for the healthcare industry, with the 2013 Norman Borlaug Humanitarian Award, we reported recently.

Linda Egle, a retired flight attendant, first visited India 25 years ago where she established a program to educate tribal children who didn’t have access to education.
Inspired by the dignified, tireless women she met, she founded Eternal Threads to help them earn an income. The nonprofit now sells fair-trade items crafted by women in a dozen countries, including Afghanistan, Madagascar and India. The women use the profits to send their children to school and improve the quality of their lives. The nonprofit also partners with non-governmental organizations, in countries including Nepal, to fight human trafficking.
When people living in poverty receive “help that helps them to help themselves, what they do with it never ceases to astound me,” Linda Egle said. “They just seize on that opportunity and use it for so much more.

Read the full story, and our award-winning feature from Nepal, “A mission of hands and feet,” that spotlights the work of Eternal Threads and Kingdom Investments Nepal, Sapkota’s organization.
Here’s a video produced by MedAssets about Egle’s work. (Look closely toward the end of the video for a cameo by yours truly — taking pictures in the blue shirt.)
PLBLTs35ocBTldnQFOJzQC7v