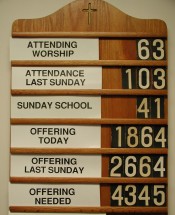 A tear-filled ending, a joyous beginning

Joy McMillon
FORT WORTH, Texas — IN A CHANGING NEIGHBORHOOD, a Texas church that once numbered more than 700 members closes and gives its building to Hispanic missions.
There’s something about a church closing that touches people deeply.
Church is where people gather to hear the word of God preached and celebrate the most significant milestones in their lives. When a church closes, members lose an intimate part of themselves.
But while the recent final service of the Rosemont church meant grief, it also brought gratitude.
“This is a day of victory, not a day of mourning,” elder James Byars told the 300 friends and former Rosemont members who gathered in the 1,000-seat auditorium. “It represents a tremendous opportunity.”
Late last year, after much prayer and discussion, the congregation voted to disband and donate its facilities and remaining finances to Continent of Great Cities. The Dallas-based ministry recruits and trains missionaries to Latin America.
Rather than watch their dwindling, 60-member church — made up primarily of people in their 70s to 90s — slowly die, or sell their building and move away, Rosemont members made a choice “to keep the name of the Lord in this community,” said elder Eugene Carroll.
This summer, Continent of Great Cities will bring in a four-family team of Latin American ministers to live in and evangelize the 90 percent Hispanic neighborhood of Rosemont, executive director Gary Sorrells said. All the ministers are graduates of the Baxter Institute in Tegucigalpa, Honduras.
“We grieved the change at first, but we are beginning to accept it now,” said Mary Winkler, a longtime Rosemont member. “We are going to leave the building to another group. We want to do what we can to encourage people to be a Christian.”
In the mid-1980s, changing times and demographics in south Fort Worth began to alter the church’s neighborhood and greatly diminish its attendance as members moved away.
Rosemont members repeatedly tried to reach their neighborhood with gospel preaching, special programs and weekly visits to newcomers, they said.
But nothing seemed to work.
A few Hispanic families became members, but door-knocking efforts generally were rebuffed by neighbors who said they wanted to hear the gospel preached in Spanish, Byars said.
“At first you don’t accept the numbers going down, and you conclude that you aren’t working hard enough,” he said. “But working harder didn’t change anything.”
The structure will close for renovations and reopen in January 2009 as the Iglesia de Christo (Church of Christ) Rosemont. Architectural changes will give it a “more Hispanic appearance,” Sorrells said.
The building also will serve as a training laboratory for future Continent of Great Cities church planting teams.
If the prototype works well, ministry leaders want to take this model to other cities with large Hispanic populations, Sorrells said.
Once a congregation of more than 700 people, Rosemont always was a missions-minded church, supporting workers and establishing churches in Germany, Australia, India, Africa, Panama, New York and New Mexico, said former Rosemont minister Charles Hodge, who preached the final sermon.
“We decided to invest our facilities here in teaching the Hispanic community, just like we would invest in any mission activity,” Byars told the audience.
In a program after the worship service, deacon Ronnie West said: “We are not giving up or having our candlestick taken away from us. Our light is not going out; we are putting on brighter lights as we transfer this building to men who are trained and can take care of what we couldn’t do.”
Tears flowed freely in the mostly gray-haired audience as speakers recalled members’ shared history and recognized the leading of the Lord in the decision to close.
“It’s a day of sweet sadness,” said Curtis Ramey, a Christian attorney who was present for the final services and conducted the meeting of the church to adopt the resolution for disbandment.
“It’s a win-win solution,” Ramey said. “Honestly, I think that God was leading them.”