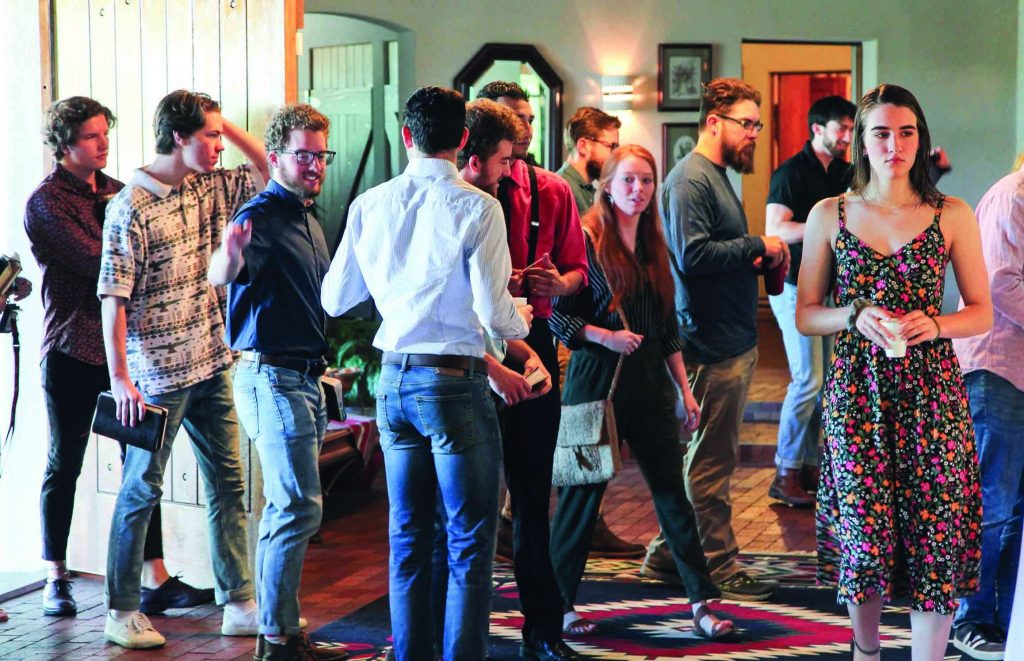 Features
The lobby fills as worshippers stream into the event center where the church plant meets. | Photos by Kaleb Turner
Print
Share:

SEARCY, Ark.— A cappella singing and partaking of the Lord’s Supper characterize the Sunday morning service of the Living Way Church of Christ. Times of prayer and Scripture reading give the gathering a traditional feel.

At first glance, the year-old church plant simply raises the tally of this Arkansas town’s already heavy contingent of Churches of Christ. But that surface-level assumption ignores one visual piece of the Living Way’s church-plant puzzle — one distinct, perfectly round piece.

There are no pews.

Round tables replace the pew-after-pew standard at the Living Way Church of Christ. The tables have been one key, of many, to the church plant’s growth and success.

“One of the things we discovered is we really liked this idea of this connection and conversation that happened sitting around the table with each other,” said Craig Russell, one of the congregation’s four elders and an original member of the church planting team. “It just happened that way because that’s where we happened to meet as we were planning for the church plant.”

Searcy might seem like an unlikely locale for a church plant: Even before Living Way, this town of 24,000, about 50 miles northeast of Little Rock, boasted a dozen Churches of Christ with more than 4,500 men, women and children in the pews on a typical Sunday, according to a national directory published by 21st Century Christian.

However, the new church aims to reach younger generations — including millennials and Gen Z — who are slipping through the cracks of many congregations in Searcy and beyond.

During the school year, Living Way benefits from the draw of Harding University, about four miles from Searcy’s Willow Wind Event Center, where the church meets. Harding is associated with Churches of Christ, and 72 percent of its 964 first-time freshmen in the fall of 2018 identified with the fellowship.

A little more than a year old, the church plant averages 150 congregants each Sunday with small-group discussions and service opportunities throughout the week.

Lord, break our hearts for what breaks yours.

Posted by Living Way Church of Christ on Sunday, October 21, 2018

On a normal Sunday, just more than 100 of the churchgoers are between 15 and 35 years old, with 30 or so congregants more than 35 years old and 10 or so under the age of 15, church leaders said.

NOT ‘JUST SITTING THERE WATCHING’

The church-planting team began its journey with a question: “How do we make a Sunday morning assembly where everyone feels connected, everyone is comfortable, and everyone is glad to come?” 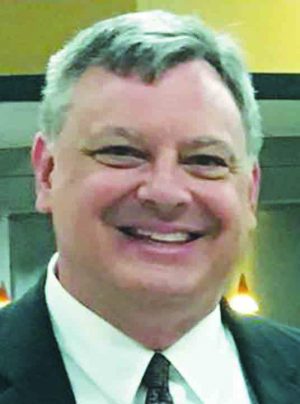 The answer followed months of research and asking critical questions aimed at rediscovering and reconnecting to a younger generation of people who had left the church.

Russell and David Hall, another Living Way elder, came from the College Church of Christ, a 1,500-member Searcy congregation that meets across the street from Harding’s campus. The church-planting team’s analysis confirmed that young people who had belonged to a church in their childhood and adolescence, for whatever reason, fell away during and after young adulthood.

With data from the College church in hand and a committed team of about 30 people, the Living Way church set out to discover what it took to create a meaningful connection with young adults.

Hall, who is the manager of the Harding University Bookstore and Heritage Inn, said several things stuck out to the team as they interviewed others and discussed the needs of what this church might look like. They found that young adults desired a deep relationship with God and with people (including cross-generational relationships), a church that was “authentic,” a meaningful community, a congregation that valued their voice and a place where they could ask critical, below-the-surface questions.

“They weren’t satisfied with just sitting there watching,” Hall said.

Along the way, Hall, whose two children graduated from Harding, found that the things sought by the young adults weren’t far from the desires of his own heart, either.

“At the core, what people really need is connection,” Hall said, “and when I was growing up, we needed that too, but we just sat there and took it on the chin.”

‘I DIDN’T KNOW I WAS LOOKING FOR A CHURCH HOME’

Miranda Farthing, a recent Harding graduate, was one of the young adults whom Living Way sought to find and connect to their congregation.

“At the core, what people really need is connection.”

For Farthing, church had become an obligation.

“I was to the point that I went out of habit,” said Farthing, who grew up in the University Church of Christ in Murray, Ky. “I actually drove four-and-a-half hours to go home. … If I didn’t drive home for the weekend, I went wherever my friends were going that Sunday in Searcy or Little Rock. Church was difficult for me.”

After she started attending Living Way, Farthing said the connection she experienced transformed the obligation into something more meaningful. That manifested in her experiences on Sunday mornings — where the tables also benefit from a table leader who facilitates group discussion, communion and prayer — but also in the conversations and relationships she experienced as she and her housemate hosted the congregation’s young professionals devotional on Wednesday nights. 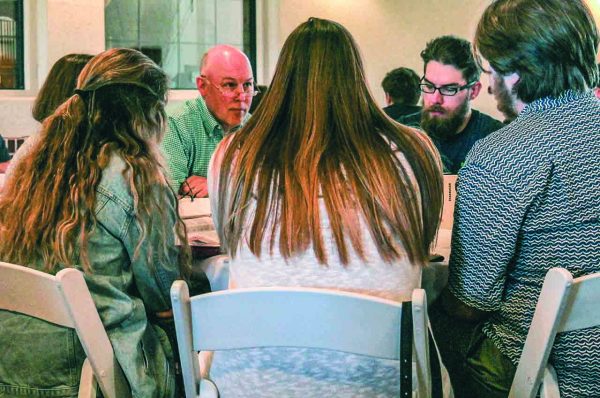 “At Living Way, I went with purpose to commune with the Lord and be with like-minded people. … They are brave and vulnerable with each other, and they are peacemakers and encouragers,” Farthing said. “I felt like I was missing something when I missed a Sunday because I was involved in the church and in their lives. I didn’t know I was looking for a church home until I found it.”

Robert Stewart and his fiancée, Erin Fletcher, were looking for a closer congregation after making a two-hour round-trip to worship elsewhere each Sunday. Stewart is a graduate student in Harding’s communication sciences and disorders program and had served as a preaching intern at two Churches of Christ in Arkansas.

“Honestly, I was a little turned off … at first,” Stewart said. “My thought was, ‘This town doesn’t need Christians to make another church; the town needs the church to live like Christ.”

However, the new church’s focus won him over.

“I loved that they were trying to create an environment for people who are burned out on their church experience,” he said. “There are a lot of ‘nones’ right now. They’re not atheists, but they’re not Christians. They just don’t really believe in anything. I think those people are won back through relationships.”

NO WAY ‘TO ESCAPE THE LOVE’

With pews not even part of the church’s equation and round tables as the centerpiece, the environment at Living Way reminds Stewart of references throughout Scripture where Jesus met around tables in fellowship with people.

“I think most churches would admit that connection is not created sitting in the pews.”

“Our tables don’t have to be actual tables, but we need to facilitate ways for our church bodies to put their arms around people and cultivate relationships,” said Stewart, who participates in one of the church’s small groups with his fiancée. “The nice thing about round tables and planned discussion times, there is not really a way to escape the love.”

As Russell and Hall look to the future of the Christian church and of Living Way, they agree that connection is key for young and old people alike.

“I think most churches would admit that connection is not created sitting in the pews. That’s not how to do it,” Russell said. “From my perspective, we need to find a way to create connection that’s beyond the pews, and it’ll be different for every church. For us, it was something as simple as, ‘We don’t have pews anymore. We have tables.’”