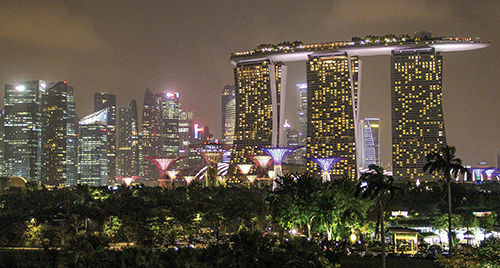 A pillar church for Southeast Asia

As it celebrates 50 years, Singapore’s Pasir Panjang Church of Christ looks back and asks, ‘What have we missed?’

Erik Tryggestad
President and CEO
SINGAPORE — Growing up in this high-tech, fast-paced financial hub of Southeast Asia, Eunice Ong loved slowing down on Sundays to worship alongside her parents. 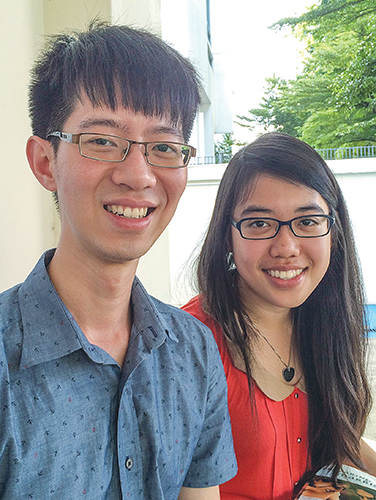 Chen Yi, 26, and Eunice Ong, 24, grew up in the Pasir Panjang Church of Christ. (PHOTO BY ERIK TRYGGESTAD)
But sometimes she felt a bit “shortchanged” by the experience, she said.

After all, Sunday was one more day she could be studying.

“My parents refused to let me skip church if there was a big exam the next day,” said Ong, whose father, Patrick, is a minister for the 500-member Pasir Panjang Church of Christ.

Her parents also taught her about “a higher being I can share my burdens with,” said Eunice Ong, now 24 and completing a degree in environmental engineering.

Regardless of her test scores, she knows God’s in charge.

For a half-century, the Pasir Panjang congregation, affectionately known as “PP church,” has grown with this tiny city-state, which occupies a group of islands sandwiched between Malaysia and Indonesia.

A former colonial outpost of Britain, the nation of 5.4 million souls is one of the world’s most prosperous countries and boasts a high standard of living — with high pressure to succeed. 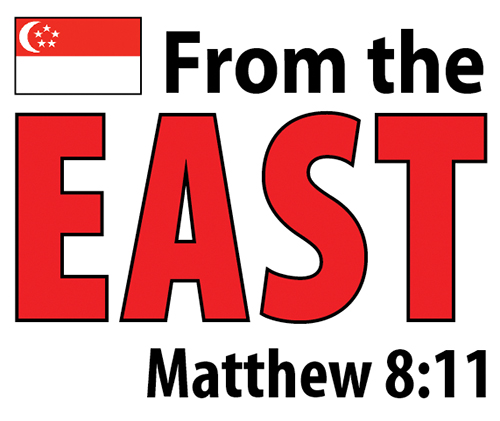 ABOUT THIS SERIES
The Christian Chronicle launched Churches That Work in 2005 to inspire Churches of Christ to take an active role in their communities. Churches That Work should be evangelistic, reaching the unchurched at home or abroad; biblical, making Bible instruction central to their mission; united, possessing a spirit of internal vitality. visible, known and appreciated for service in their community. The Pasir Panjang church is the first outside the U.S. to be featured in this series. Find more Churches That Work under the ‘Series’ tab.The church, once a recipient of missionaries and missions funding, now is self-supporting, served by five elders and eight deacons, with three full-time ministers.

As its members reach out to their overscheduled, over-stressed society, they support missions from the Philippines to England. The church houses a branch of Texas-based Sunset International Bible Institute, which trains ministers from countries including Myanmar and Vietnam.

The congregation’s 50-year history “is a testimony to the world that Pasir Panjang is really a mature church and a pillar of the development of Churches of Christ in Asia,” said Herbin Simanjuntak, a minister and administrator of Batam Bible College in Indonesia, another Sunset-associated school.

“Pasir Panjang is like the church in 1 Thessalonians,” Simanjuntak said, referencing the apostle Paul’s praise for a congregation that “became an example to all” as it spread the Good News to its neighbors.

“It is the same with Pasir Panjang — not only in Singapore, but every place,” he said.
REACHING OUT TO THE OVERWORKED
Here, Eunice Ong’s desire to excel is hardly unique. 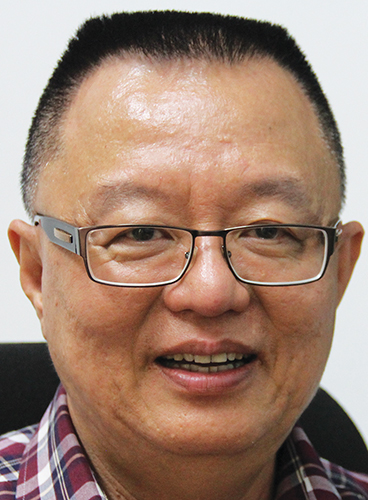 Tan“Generally, Asian culture is more results-driven, I think, especially in Singapore,” said Chen Yi, who also grew up in the church. His father, Tan Beng Chuan, serves as an elder and minister. “Our parents teach us to rely on God, but the expectation to perform is still present.”

An estimated 97 percent of students in Singapore are enrolled in tutoring programs outside their schools. On Saturdays, they pack into the city’s multilevel shopping malls to take lessons at specialized learning centers — next to boutiques selling the latest Louis Vuitton fashions and Samsung gadgets. 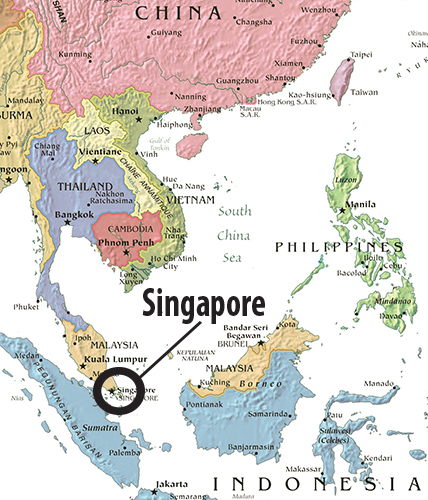 STAFF: Ministers Henry Kong, Tan Beng Chuan and Patrick Ong. Kong will step down in 2017 after 50 years of ministry, and Tan will serve as senior minister.

SERVICES: Two Sunday morning services in English and one in Chinese. Bible classes for Filipino Christians and the hearing-impaired. Sunday evening worship in English.

HISTORY: The church was launched in 1964 when Ong Aun Nam assembled a group of young people in the low-cost housing estate of Queenstown. Missionaries A.L. Harbin and Pence Dacus worked with the congregation before selecting Henry Kong to take over the work. The church purchased its current property with a loan from the Quail Springs Church of Christ in Oklahoma City. The church repaid the loan and is self-supporting.

WEBSITE: www.ppoc.org
About 75 percent of the country’s population is of Chinese descent, with substantial Malaysian, Indian and Eurasian minorities. There are also many foreign workers from the other parts of Asia, including the Philippines and China.

That mix creates a diverse religious landscape. Located between two predominantly Muslim countries, Singapore’s suburbs are lined with Buddhist, Hindu and Christian houses of worship, often side by side.

“Religion is free here. There’s no persecution,” said Doreen Lim, whose husband, Li Chhoan, is a deacon of missions for the Pasir Panjang church. As a result, people take faith for granted, she said, and focus instead on the “five Cs of Singapore” — cash, car, credit card, condo and country club. Many work 11-hour days and weekends in pursuit of these goals.

“It’s even worse because now everything is online,” Doreen Lim said. “When you’re home, you turn on your computer and, ka-ching, you’re working!”

Doreen Lim grew up in a Taoist home and was introduced to the church by her sister. Though she studied about the historical Jesus in school, Bible class was the first time she encountered Christ as Savior, she said.

As newcomers get to know Christ and become baptized believers, the church’s Care Teams play a vital role in nurturing their faith, said minister Tan Beng Chuan. Members meet in small groups two to four times per month to study and share each other’s burdens and anxieties.

Eunice Ong said her Care Team helps young and old believers “support each other through life’s challenges. … It’s something we can’t get easily, just meeting on Sunday.”

Nowadays church members can’t rely on door-knocking to win souls, as they did in the early years of the church, Lim Li Chhoan said. Instead, they practice “friendship evangelism” and focus on ways to help their overworked community.

For example, church members who teach have hosted classes for parents who want to help their children prepare for tests in math and science. These classes have introduced families to the church, including Winston and Hong Ngee Chong, who were later baptized. 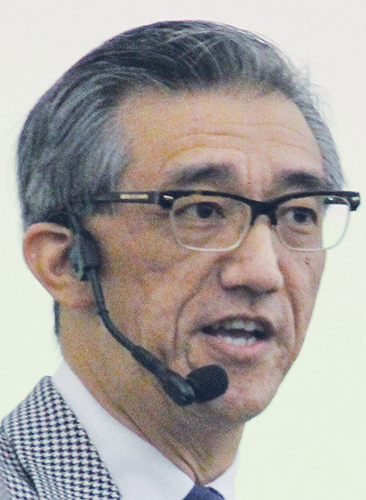 ChongWinston Chong, who works in Singapore’s financial sector, now serves as an elder. He sees a need for churches to minister to businesspeople, teaching against corruption and about the value of fair profit, of honoring one’s word.  In a culture focused on material gain, “that’s where we need to be shining the light the brightest,” he said.

The church continues to look for new opportunities to point Singaporeans away from the “five Cs” and toward the one “C” that matters — Christ, Tan said.

Christians, he added, must recognize that “right at the door there is a mission field.”
REACHING AROUND THE GLOBE

The church takes its international mission work as personally as its small-group ministry.

The church has an internship program that sends about a  dozen young believers to assist in local and international work. It also sponsors an annual retreat for its members and invites church workers from abroad.

“They’re looking for partnerships. They don’t do missions solo,” said Brandi Kendall, one of the instructors at the Sunset school housed in Pasir Panjang’s building.

“They have a vested interest in mission points,” said Kendall, himself a former missionary in the European nation of Estonia. “They know the names and the faces.”

Jhun Ma and his wife, Babe, serve as missionaries in Tuao, Philippines, with support from Pasir Panjang.

“The first few years of the Tuao church were really a struggle,” Jhun Ma said, but the Pasir Panjang church “showered us with the needed support,” sending church members “to refresh our spirits and encourage us to continue in the work.”

Elders and deacons continue to visit with teams of youths, the missionary said. “They make sure that every member has the opportunity to know and experience life in the mission field.”

Members of the Pasir Panjang church sing during Sunday worship. The 500-member church has two Sunday morning services in English and one in Chinese. (PHOTO BY HENRY KONG) ‘WHAT IT MEANS TO BE A CHURCH’
Despite successes in ministry and missions, there’s a sense of discontent among the church’s leaders.

As the congregation celebrated a “year of jubilee” to mark its 50th anniversary, the elders used the opportunity to revisit its mission — with prayer and meditation.

“Looking back, what have we missed?” asked Chong.

Earlier this year the elder delivered a Sunday morning sermon on “Revisiting the New Testament church.” Early Christians showed real joy as they came together and shared what they had, he said. Two thousand years later, “have we fallen victim to forms and forgotten what it means to be a church?”

He mentioned controversies that cause divisions among Churches of Christ — debates over how many cups to use in communion, whether or not churches should have Bible classes or kitchens.

“Thankfully, not all of this has come to Singapore,” Chong said, though congregations here have experienced discord over the years. The elder urged the congregation to return to Scripture and focus on being “a people of restoration” rather than a people so focused on a perceived pattern that they miss the crucified Christ. 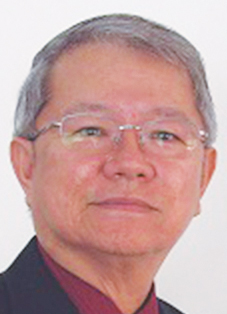 KongAfter the sermon, Henry Kong addressed the congregation. Kong has ministered for Pasir Panjang for nearly 50 years and helped guide the church through the selection of its leaders.

“Brother Winston has encouraged us to see the forest as we look at the trees,” Kong told the church. “Let’s look for transformation. Let’s look for a better walk with God.”

Church shouldn’t be one more thing on the people of Singapore’s already-too-long “to do” lists, he said.

“Let’s make this year a year that our faith means something to us.”

Filed under: Churches That Work From The East Headlines - Secondary International News Series