But Hurricanes Irma and Maria failed to kill the spirits of those in this poor, coastal community who lived through the mayhem and work to rebuild.

Sandra Rosa Vargas is one. 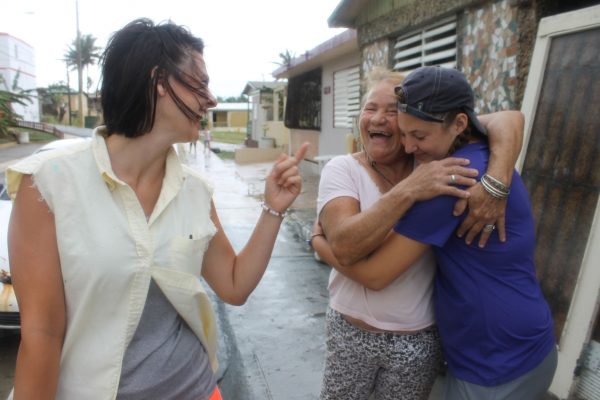 Alicia Brophy’s hair blows in the wind as she visits with Sandra Rosa Vargas and Ashton Brophy, Alicia’s 13-year-old daughter.

On a recent weekday, the 62-year-old great-grandmother walked arm in arm along a pitted neighborhood sidewalk with a teenager who came with her Kentucky church to offer help and encouragement.

The two connected instantly, 13-year-old Ashton Brophy said, as Vargas shared stories of her life and offered to teach her new friend how to cook.

“I just really love Mrs. Sandra,” Brophy said of the widow whose oceanside home of rocks, seashells and cinder blocks had its roof peeled away by winds that registered roughly 150 mph.

“She is just very sweet. … She made lunch for us, rice and salad and chicken. She was telling me all about her grandbabies,” the teen added. “I just want to do everything I can to help her.”

“I knew God was calling me to go.”

Twenty-six other mission team members from the Reidland Church of Christ in Paducah, Ky., shared Brophy’s sentiment. They traveled nearly 2,000 miles to demonstrate their love and concern for their Puerto Rican brothers and sisters.

“I just heard about the destruction here and how bad things have been for them,” said Alethia “Ali” Williams, 14, who came with the Reidland group. “I felt really bad, and I knew I had the ability to help. … I knew God was calling me to go.”

Two weeks after avoiding the worst-case scenario with Irma, this Caribbean island of 3.3 million people took a direct hit from Maria on Sept. 20, 2017.

An estimated 4,645 people died as a result of Maria, according to a Harvard University study. After a different study, Gov. Ricardo Rossello raised the official toll from 64 to 2,975.

Here in Arecibo, a city of 100,000 about 50 miles west of San Juan, 4 feet of water washed into the newly constructed building of the Church of Christ that missionary Jim Gullette and his wife, Connie, have served for 21 years.

On a recent Sunday, the English-speaking Christians from Kentucky joined the Spanish-speaking congregation for a bilingual worship assembly in the repaired facility on Puerto Rico’s northern coast. 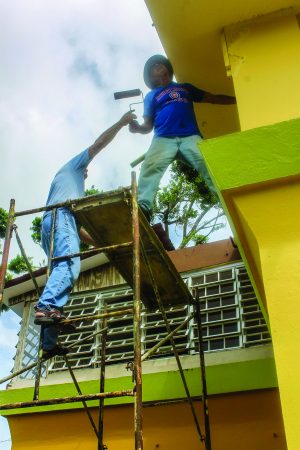 The church members sang “This Is The Day (That the Lord Has Made)” in each language. Those leading the communion prayers alternated between English and Spanish.

“Here we were — two different languages, two different worlds, with one heart and one spirit,” said Joni Goodman, 41, a Reidland church member who joined her 13-year-old son, Cayden, on the trip. “I just cried throughout the whole service. It was so sweet, so emotional. The spirit of God was just alive.”

Arecibo church member Rosa Mastache Dominguez prepared homemade meals such as shepherd’s pie for the mission team. She choked with emotion as she voiced appreciation for the Kentucky group.

“For the entire congregation,” Dominguez said that Sunday morning, “there are no words that we can say to thank you for the help you’ve given after Hurricane Maria.” 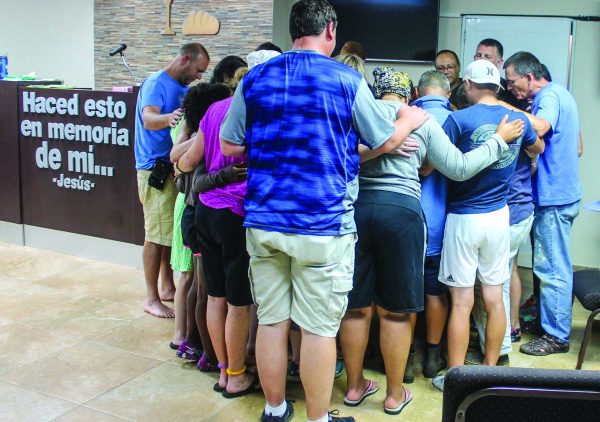 Just across the street from the Arecibo church, nightfall brings signs of drug trade and prostitution. It’s not a safe place to linger after dark, the Kentucky group was warned.

The area was hurting before Maria, Gullette explained, but the storm made the depression worse.

“All these homes on the right are pretty much abandoned now,” the missionary said as he drove along a nearby roadway. “Some people had no place else to go, so they’ve repainted and cleaned out the debris. But you can see down the street that there’s hardly any cars.”

Many businesses closed. Half the streetlights still don’t work. A Walgreens pharmacy blocks from the church just reopened, as did a Pueblo supermarket that had to be rebuilt. 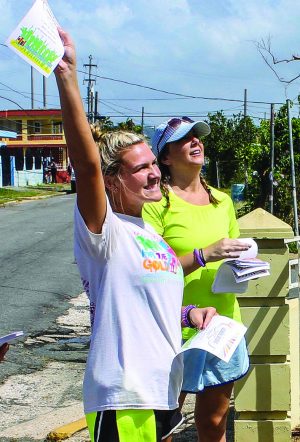 After Maria, Christians from Alaska to Florida sent about $100,000 in donations to the Arecibo church, said Gullette, who is supported by the South Plains Church of Christ in Lubbock, Texas.

Even before Maria, Brian Brophy, the Reidland church’s associate minister, and his wife, Alicia, traveled to Puerto Rico to explore organizing a mission trip to the island.

The hurricane only intensified the congregation’s desire to show the love of Christ on an island where nearly half the population lives in poverty.

Besides construction projects, the Kentucky team sponsored a hot dog cookout and children’s carnival — featuring a bouncy house, games and face painting — to encourage neighborhood children and their families.

“Things such as drinking water and security that I take for granted at home — they’re real issues here,” said Charidy Dobbins, a 33-year-old nurse who cleared debris and helped install a new roof at the home of Arecibo church member Annea Soto. 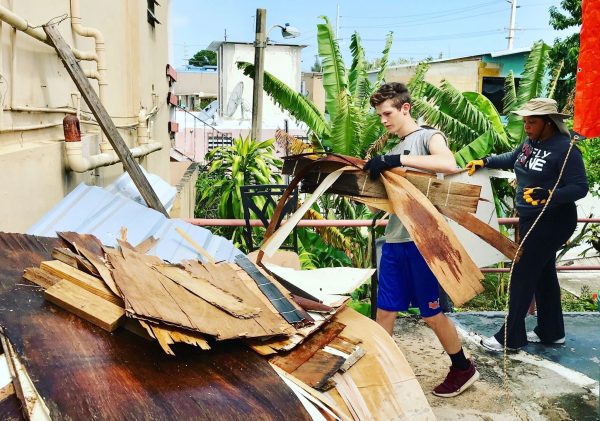 Carter Space and Charidy Dobbins remove debris from the Arecibo home of Annea Soto, a victim of Hurricane Maria.

Soto served fresh papaya to the group working at her house and made lunch for everyone — frying bread with beef inside on her stovetop.

“I have waited a long time,” Soto, speaking through a translator, said of the repairs. “God put the brothers and sisters from the Church of Christ in my path.” 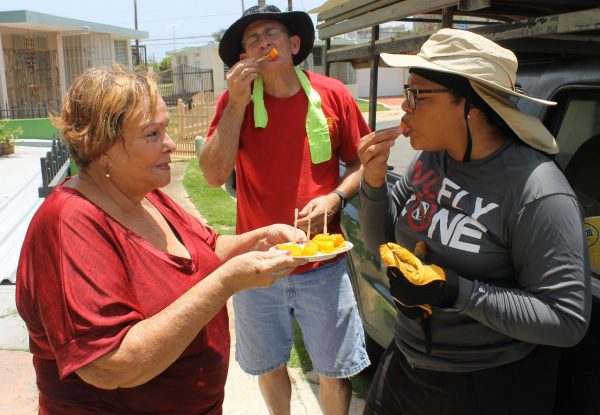 Annea Soto offers papaya grown in her back yard to Terrell Lee and Charidy Dobbins.

Mission for all ages

To fund the trip, the 200-member Reidland church produced what its leaders called “a fun and over-the-top lip dub video for social media.”

The lip dub was a mashup of 10 contemporary Christian music hits on the themes of mission and love for others, said Brian Brophy, who is Ashton’s father and Reidland senior minister Terrell Lee’s son-in-law.

“The neat thing is, we just put out the word, and not a penny of this is really coming out of our pockets,” Lee, the church’s preacher for 34 years, said of the trip’s funding. “People saw the video, and they responded.”

The mission team ranged from 10-year-old Jude Williams to 70-year-old Martha Crocker, both of whom helped paint a Maria victim’s damaged home.

“No matter what age you are, you can minister to other people and not be afraid, even though you don’t speak the language.”

Crocker is a former Florida resident whose own home sustained $150,000 in damage during Hurricane Charley in 2004.

“No matter what age you are, you can minister to other people and not be afraid, even though you don’t speak the language,” said Crocker, who wants to be an example for other older people.

Related: As Katrina roared toward New Orleans, Charles and Angela Marsalis sought refuge at their church

God must have a sense of humor, she said with a chuckle, because he gave her a paintbrush. The home owner, Julio Candelario, showed his gratitude by ordering four large pizzas to feed the group at lunchtime.

As the volunteers ate, Arecibo church member Edwin Quinones told them Puerto Rico can’t afford to repay its debt of appreciation. But he said, “We ask for blessings for you because we know the Lord can pay you back threefold.”

Carson McKee, 19, right, and Ashton Brophy, 13, from the Reidland Church of Christ in Paducah, Ky., talk about helping with Hurricane Maria relief work at the home of “Mrs. Sandra,” a widow who lives in Arecibo, Puerto Rico. Video by Bobby Ross Jr.

Posted by The Christian Chronicle on Monday, July 9, 2018

Back at Mrs. Sandra’s house, the chatter of grandchildren running in and out the front door mixed with the noise of drills and hammers.

Pet birds chirped as dogs rested on the floor. A black cat hid above the kitchen sink near the ceiling. 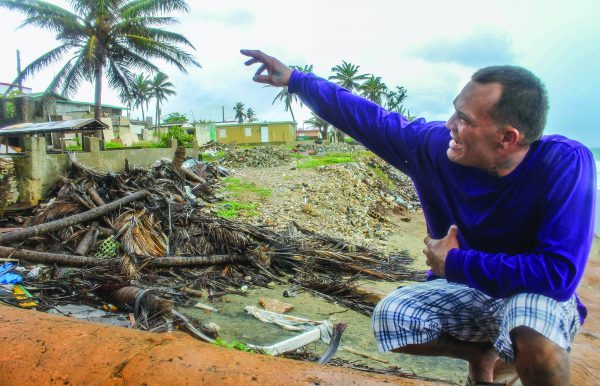 Light rain from the remnants of Tropical Storm Beryl — which had caused a temporary panic and rush on grocery stores before weakening — dripped through still-open holes near the roof as Vargas recalled her experience with Maria. 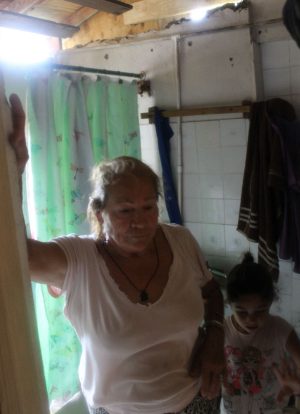 “A big palm branch and an almond tree branch hit the roof, and then it all blew off. I watched it happen,” said the mother of three, grandmother of 10 and great-grandmother of nine, who witnessed the destruction from a cousin’s nearby home.

A Bible open to Malaquías — “Malachi” in English — sat on a DVD player in her living room.

Vargas grabbed a hammer to help with the construction, pausing occasionally to straighten frames and artwork on her red walls.

“I love this girl,” she said as she wrapped her arms around Ashton.

As the teen and other mission team members loaded into their van at the end of the day, Mrs. Sandra wiped tears from her eyes.

She kissed her hand and blew the kiss toward the group as the vehicle drove away.