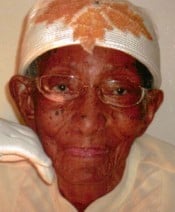 Bobby Ross Jr.
Margaret Cooke felt numb.
She could not believe what she was seeing.
For more than a half-century, Cooke, 78, had prayed that her mother, Lula Wallace, would accept the Gospel.
Now, five months shy of her 109th birthday, Wallace — still in her wheelchair — was being lowered into the chilly water at the Norris Road Church of Christ in Memphis, Tenn.
Cooke would find it difficult to sleep the next few nights, as if it had been a dream and she might wake up to discover Wallace really hadn’t confessed her faith in Jesus and washed away her sins.
“We haven’t tried to force it on her in any kind of way,” said Cooke, a Norris Road member influenced to become a Christian by her late husband, Ben. “Any time we had an opportunity, we’d just say a few words. … We’ve just always made sure that we lived the life before her and let her know that Christ always came first in our lives.”
Thirty years ago, Cooke helped win her younger sister Virginia Mack to the Lord. The sisters — two of 11 siblings born to a farming family — take turns caring for their mother at her home near Batesville, Miss., about an hour south of Memphis.
“I feel God has kept her around this long for a reason,” said Mack, 66, a member of the East Frayser Church of Christ in Memphis.
Wallace — a grandmother of 22, great-grandmother of 45 and great-great-grandmother of 20 — always has lived an extremely moral life, her family said.
“No smoking, no drinking, no gambling, and she better not think that you’re doing it,” Mack said. “You had to live a clean life, and that’s the way she was.”
The late Nokomis Yeldell, the pioneering minister of the Norris Road church, came to Wallace’s house and joined the daughters in pleading for her to be baptized. But she always declined — until a recent Thursday morning.
That day, Cooke sat down on the side of her mother’s bed. They started talking about old times, as her mother loves to do. When Wallace complained to her daughter that “people just don’t want to do what God wants them to do,” Cooke sensed an opening.
“Oh, you are so right,” Cooke said, starting in Genesis and leading her mother all the way through the Bible to Jesus’ death on the cross.
At the end, Cooke smiled at her mother and asked, “Don’t you want to be baptized?”
“Yes,” she replied.
For the longest time, Cooke didn’t say anything. Then — still in shock — she asked the same question one more time. Again, her mother replied, “Yes.”
Still nervous that her mother might change her mind, Cooke called her sons and daughters — Wallace’s grandchildren — and told them the news.
Nobody believed it right away.
“Y’all pray,” Cooke urged as she dressed her mother and prepared to drive her to Memphis.
At the Norris Road church building, John DeBerry, minister of the Coleman Avenue Church of Christ in Memphis and a cousin of Cooke’s late husband, took Wallace’s confession.
“Listen, I’m not doing this for no man,” Wallace said, according to her daughter. “I’m doing this for myself and God.”
Two of Cooke’s sons — Wayne and Stanley — carried their grandmother in her wheelchair down into the water. After a bit of maneuvering, they pulled her out of the wheelchair and baptized her.
“It was one of the most gratifying experiences I’ve had in nearly 45 years of preaching, to be frank about it,” said DeBerry, also a Tennessee state representative. “You thank the Lord that he allowed her to live so long. You have to feel as though the Lord knew her heart … and for some reason, his grace and mercy allowed her not to leave this earth” unsaved.
Norris Road minister James Michael Crusoe prayed after she emerged from the water, and the crowd assembled for a Thursday morning Bible class greeted their new sister.
On the ride home, Wallace sat back and slept the entire way.
“Where have you all been?” Mack asked when she reached Cooke on her cell phone after trying to call the house.
“Mother was just baptized,” Cooke replied.
“What?” Mack said. After realizing she’d heard right, she screamed with joy.
Back home, Wallace ate a senior meal prepared by the Norris Road church and returned to bed. The next day, Cooke had to leave before Wallace woke up. She softly kissed her mother.
“Sometimes, my mom’s mind is not very clear,” Cooke said. “But that (Thursday) morning, it was very clear. She knew what she wanted to do.”