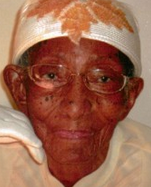 Last year, The Christian Chronicle shared the inspiring story of Lula Wallace, who accepted Christ in baptism at age 108:

Margaret Cooke felt numb.
She could not believe what she was seeing.

For more than a half-century, Cooke, 78, had prayed that her mother, Lula Wallace, would accept the Gospel.
Now, five months shy of her 109th birthday, Wallace — still in her wheelchair — was being lowered into the chilly water at the Norris Road Church of Christ in Memphis, Tenn.
Cooke would find it difficult to sleep the next few nights, as if it had been a dream and she might wake up to discover Wallace really hadn’t confessed her faith in Jesus and washed away her sins.
“We haven’t tried to force it on her in any kind of way,” said Cooke, a Norris Road member influenced to become a Christian by her late husband, Ben. “Any time we had an opportunity, we’d just say a few words. … We’ve just always made sure that we lived the life before her and let her know that Christ always came first in our lives.”

The Chronicle has learned that Wallace died Thursday, Nov. 29, at age 109.
A memorial service will be conducted at 6 p.m. Friday, Dec. 7, at Cooley’s Mortuary in Batesville, Miss., reported her son-in-law James Mack, a member of the East Frayser Church of Christ in Memphis, Tenn. A funeral service is planned at 11 a.m. Saturday, Dec. 8, at Salem Missionary Baptist Church in Courtland, Miss.