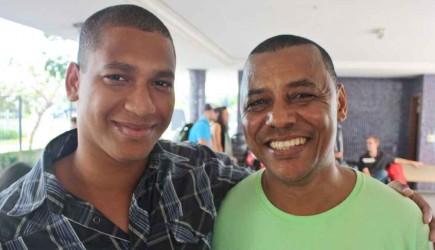 Erik Tryggestad
VITORIA, Brazil — “Don’t try to change me, preacher. I like wine, and I like women.”
Antonio Silva remembers saying those words to a U.S. missionary nearly 13 years ago. At the time, Silva used most of the money he made as an electrician to satisfy his drinking habit. Friends joked that his car trunk, always filled with liquor and ice, was a “bar on wheels.”
The only reason Silva had set foot in the Vitoria Church of Christ was as a favor for his nephew, Marcus Mendes. Mendes, whose parents were baptized by the missionaries, had begged his uncle to come to church, with no luck.
Finally, when Silva asked Mendes what gift he wanted for Children’s Day — a holiday in Brazil — the young boy saw an opportunity. Come to church, he asked his uncle. That would be his present.
Silva did just that. The first thing he saw when he entered the building was two missionaries dressed up in bedsheets, pretending to be Bible characters.
That was odd enough, he said. Then one of the missionaries, David Duncan, asked him if he wanted to study the Bible. When Silva told him he had no interest in changing, Duncan was speechless  — but only for a moment.
“Nobody has the right or the power to change you,” Duncan replied. “Only Jesus can do that. I’m just inviting you to know Jesus.”
“Then it was my turn to be speechless,” Silva said.
In the weeks that followed, Silva and Duncan studied the Bible. Silva changed his life and committed to one woman — his wife, Dalva. Duncan and missionary Taylor Cave baptized them side-by-side in the Atlantic Ocean on a moonlit night.
“As we stood in the water, two falling stars crossed in the sky right in front of us,” Duncan said. “Someone yelled, ‘E um sinal de Deus!’ (‘It’s a sign from God!’). I don’t know that it was a sign from God, but I don’t know any other way to explain it.”
Now, more than a decade after their baptisms, Silva and his wife remain stalwart members of the Vitoria church, where Silva leads singing.
Recognizing that his nephew’s gift led to his salvation, Silva returns the favor, inviting others to church. A childhood friend of Silva’s, Alcenir, and his wife, Elisangela, accepted the invitation. Two former missionaries to Vitoria, Terry and Kelli Fischer, studied the Bible with Silva’s friends. The couple was baptized in 2007.
“Antonio’s enthusiasm while leading singing is so contagious,” Terry Fischer said. “He and Dalva have faced a lot of challenges, and they are still there every time I go back to visit — worshiping and serving and teaching their two children to obey Jesus.”