Two South Carolina churches have a goal to welcome brothers and sisters in Christ and to witness to ‘a Christianity that is divided.’ 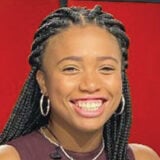 ANDERSON, S.C. — After the Sunday morning service at the Upstate Church of Christ, everyone pours into the fellowship hall to share a meal.

The menu is a mix of Ukrainian-style foods such as vvarenyky and holubtsi — boiled and stuffed dumplings and stuffed cabbage — and American dishes like fried chicken, green beans and mac and cheese.

The hall is filled to capacity — 82 souls — with people at every table talking, laughing and fellowshipping together.

This is the scene after a recent joint assembly between the Upstate church and a Slavic evangelical congregation — the Church of Anderson — that shares its facility. 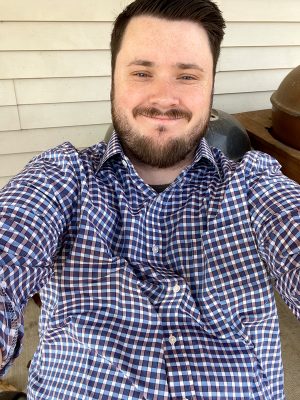 Andrew Hicks serves as the Upstate Church of Christ’s minister.

“It is an excellent example of what Christian unity looks like in actual practice,” Andrew Hicks, Upstate minister since Easter of 2020, said of the partnership.

The front doors of the Upstate church, 30 miles south of Greenville, open into the fellowship hall.

The room is filled with several rows of long white tables, and before the joint worship, coffee and snacks are served. Many of the Upstate members and special guests greet each other with smiles and hugs.

In the auditorium, four sections with rows of red-cushioned chairs fill the room. Two projectors hang from the ceiling above the stage with a baptistery behind it. By the time worship begins, almost every chair is full.

The service opens with prayer, singing and announcements followed by the Lord’s Supper. Afterward, the congregants take three minutes to meet and greet each other while those ages 10 and under exit for a special children’s program.

Once everyone sits down, the believers sing, and the preacher starts his lesson.

A month before, the congregations held their first joint worship service, and the ministers from both churches taught together. But on this recent Sunday — their second time gathering together — the Church of Anderson’s Yuri Sushchik, who ministers and also runs a small trucking company, preaches alone. 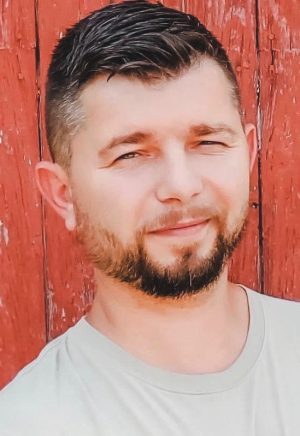 Yuri Sushchik, born in Ukraine, is a minister for the Church of Anderson and runs a small trucking company.

Sushchik, who immigrated to the U.S. at age 2 as his family fled communism, teaches about recognizing God’s blessings and showing proper gratitude. He also stresses the importance of getting to know Christ, referencing 2 Corinthians 4 in its entirety.

“When you get to know him … you start to realize that you want that heart of God,” Sushchik says.

Usually, the Church of Anderson meets at 2 p.m. Sunday, and the service integrates both languages. But the congregation is trying to fully transition to English.

Sushchik ends his message with a prayer. He speaks in English, while several Church of Anderson members whisper their requests to God aloud in Russian.

Before coming to America, the Church of Anderson members felt displaced. In the 1980s and early 1990s, Christianity was not accepted in the Soviet Union.

Todd Collins, an Upstate member, said the Ukrainians immigrated to the U.S. for religious freedom.

Several of the Church of Anderson members recently moved to Anderson from other states, and some have been there for longer. Sushchik said that the congregation has a purpose and vision.

“We have a vision/purpose of our existence as a body to build a bridge of transition, aiming to take people out of religiosity and bring them into a personal relationship with Christ,” he said. 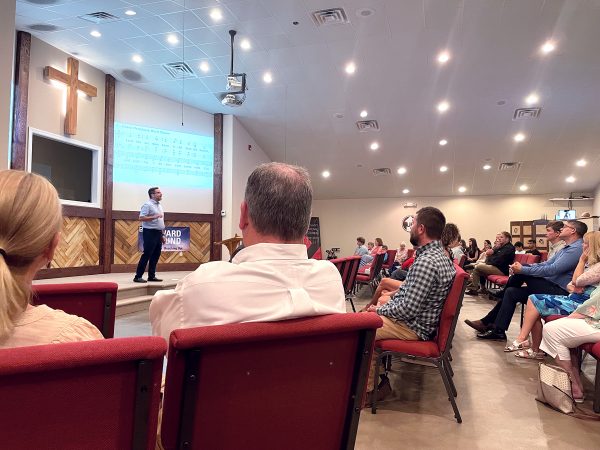 Members of the Upstate Church of Christ and the Church of Anderson in South Carolina worship together before gathering for a joint fellowship meal.

Before the partnership, the Church of Anderson held worship services in several houses. The journey to find a church facility to rent involved lots of door knocking and many prayers, Sushchik said.

The Ukrainian Christians prayed for God to open doors, he said. They were praying, “God, open the doors that are from you, and close the ones that are not.’”

On a Saturday this spring, a couple who are in charge of fellowship for the Upstate church were preparing the building for that Sunday’s service. They forgot to lock the door, and two men entered and asked about the church’s worship assembly.

The next day, the two men — Sushchik and another Church of Anderson member — and their families attended the Upstate church’s service. Afterward, the men approached the elders and inquired about renting the facility.

At the time, Hicks, the Upstate minister, was out of town. A church elder called him and explained what happened. Upstate church leaders took time to talk, think and meet with the leadership from the Church of Anderson.

As the elders met with the Church of Anderson, they realized that the congregations’ beliefs — Christ crucified, baptism as necessary for salvation and only using the Bible — largely lined up.

Finally, Upstate leaders brought the idea to their congregation’s attention. Upstate member Katie Burleson was excited by the opportunity for the building to be used by other Christians — and for the fellowship.

“I’ve really respected our elders in being open to this group of Christians who just needed a physical home,” Burleson said.

Ultimately, the Upstate church decided to go ahead with the partnership. “We are a congregation that has to be an example to each other,” elder Jeff Cutler said, “and we have to be an example to our Ukrainian brothers and sisters and to our community.”

Thus far, the monthly joint service has opened the minds of more traditional Upstate members, Hicks said. And the fellowship, he said, has shown the members that what unites the two congregations is more important than any cultural differences.

Pro-Russian separatists have seized a second meeting place of a…

When the Iron Curtain came down, people in the former…