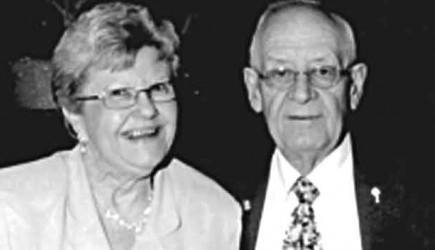 A life dedicated to service: 50 years of preaching for the same congregation

Bernie Crum, pictured with his wife, Janice, served as pulpit minister for the Flat River Church of Christ in Missouri for 50 years.

As Christmas approached this year, Janice Crum noticed something slightly amiss with her husband. She told him he seemed fidgety. That is not a word that would normally be applied to Bernie Crum. He borders on serene.
But when a woman has been married to a man for 56 years, she has a certain sense about these things, and upon reflection, Bernie had to admit that yes, he was feeling fidgety.
For the first time in almost 60 years, he would not be giving a Christmas message.
“I guess I’m like a racehorse ready to run, but there is no race,” he told me when I visited earlier this week.
For the last 50 years, Bernie has been the minister at the Flat River Church of Christ. He retired in November. He and his wife still live in the parsonage across the street from the church. Because of their long service to the church, the parsonage will remain their residence for as long as they live.
By the way, the Church of Christ is not big on titles. A minister is not addressed as Reverend or Father. He is addressed as Brother, a title also used for church elders.