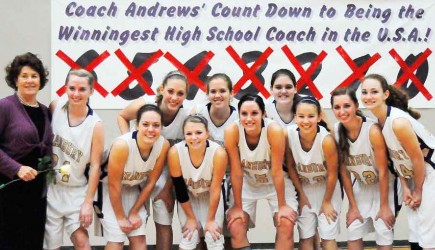 Staff reports
GRANBURY, Texas — When the final seconds ticked off the scoreboard, the Granbury Pirates lifted their coach, Leta Andrews, in celebration and carried her to midcourt.
Though the team’s 62-43 win over Midlothian was impressive, the reason for the celebration was another number — 1,334 career victories for Andrews.
The coach already held the record for most high school girls coaching wins in the nation, according to the National Federation of State High School Associations.
With her 1,334th win, Andrews — a member of the Granbury Church of Christ — passed the overall mark for most high school wins set by boys coach Robert Hughes in nearby Fort Worth.
After the game, Andrews told the cheering crowd that she has “the best job of anybody in the world,” the Fort Worth Star-Telegram reported. Andrews has coached basketball for nearly 50 years and once played for the Lady Pirates.
“Being a Lady Pirate myself, I appreciate the town and the people,” she said.
Andrews and her husband, David, are dedicated members of the Granbury church, minister John Knox told The Christian Chronicle.
“Leta is an amazing Christian lady, whom we hold in very high esteem,” Knox said.
Andrews, 72, is known as a no-nonsense coach who makes her players say “yes, ma’am” and “no, ma’am” and scolds them if she thinks they’re too distracted with boyfriends, The Associated Press reported.
And after each game, she washes the team’s uniforms.