CEDAR GROVE, Tenn. — My dad, Bob Ross, bent down and brushed leaves off the flat grave marker so he could read the inscription. 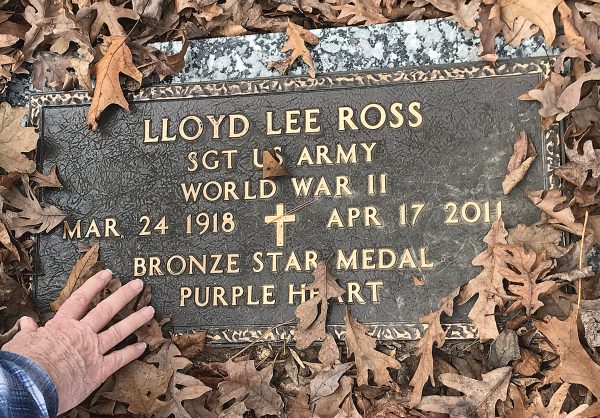 Nearby, the larger headstone for my father’s parents — Lloyd and Margaret Ross — noted that they were married Feb. 5, 1941. Their earthly union lasted 68 years before Grandma Ross died just before Christmas in 2009.

I’ve written previously about this middle-of-nowhere cemetery in rural West Tennessee, about 100 miles northeast of Memphis.

Generations of my family — going all the way back to my great-great-great-great-grandfather Daniel Ross (1791-1842) — are buried at Palestine Cemetery under patches of grass by an old white church building.

But Dad and I hadn’t been back since Papa’s funeral nearly nine years ago. We hadn’t seen his World War II grave marker. So it was nice to touch it and snap a photo.

I didn’t become overly emotional as I stood in this place and reflected on my grandparents, who were faithful members of the Huntingdon Church of Christ, about 15 miles away.

Under a bright blue sky, I smiled at the thought of their looking down on us, enjoying another perfect day in paradise with our heavenly Father and his son, Jesus.

Under a bright blue sky, I smiled at the thought of their looking down on us, enjoying another perfect day in paradise with our heavenly Father and his son, Jesus.

Dad and I stopped at the cemetery on our way to the 84th annual Bible Lectureship at Freed-Hardeman University in Henderson, Tenn., where I moderated a “Christian Chronicle Live” panel on church shootings.

My 74-year-old father spent part of his childhood here in West Tennessee, where Papa raised cotton after serving in the war.

Later, I spent a few years of my childhood here, too.

Related: Cemetery a glimpse into past, comfort for the future

A half-century ago, during Dad’s time in the military, I was born at an Air Force base in Laredo, Texas, along the U.S.-Mexico border. After returning home from a year in Greece during the Vietnam War era, Dad was stationed in Blytheville, Ark.

When he left the military, he used GI Bill benefits to attend White’s Ferry Road School of Preaching in West Monroe, La. From there, we moved to Roanoke Rapids, N.C., and later Elkin, N.C., to work with small Churches of Christ. 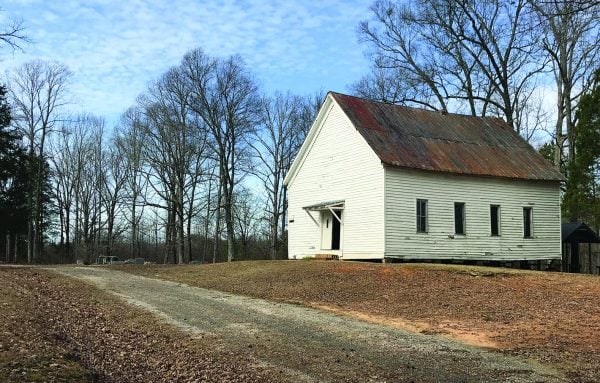 When I was 12 years old, Dad decided he needed more Bible training. He chose to enroll at Freed-Hardeman as an older student, then in his mid-30s. So we moved to Jackson, the area’s commercial hub.

I have so many fond memories of that time, an era in which Jimmy Carter and then Ronald Reagan served as U.S. president.

Related: My grandmother’s lifetime of love, faith and devotion

I remember Mom working as a waitress at Waffle House to help support our family. To this day, I always make sure to tip well because I know how much it means to those depending on the income.

I remember my younger brother, Scott, and I riding our bikes to a neighborhood Kmart store and going “dumpster diving” at an apartment complex to collect aluminum cans to sell. My baby sister, Christy, was too young to join these excursions.

I remember going to country concerts to hear singers such as Ronnie Milsap and Janie Fricke and professional wrestling matches to watch Jerry “The King” Lawler. Even then, I suspected wrestling was fake, but I found it so entertaining.

I remember my late grandmother Edith Nanney, my mother Judy’s mom, coming to spend summers with us and joining us at the small country church where Dad preached during his Freed-Hardeman days. Grandma Nanney liked to joke that she always sat by me so our terrible singing voices could drown out each other.

I remember — vaguely — dressing up and attending the commencement ceremony when Dad graduated from Freed-Hardeman in 1981. I know I was proud of him, but I don’t recall much else. 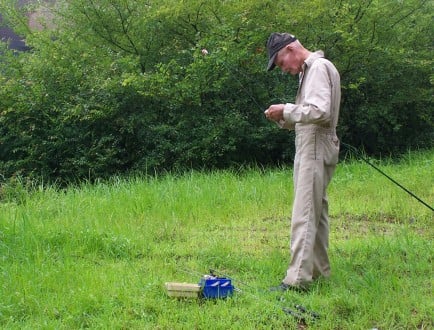 The late Lloyd Lee Ross baits a hook while fishing with grandchildren and great-grandchildren in West Tennessee.

After that, we moved again — first to West Plains, Mo., and then to Keller, Texas, where Mom and Dad served as houseparents at Christ’s Haven for Children from 1982 until 2007. Dad worked secular jobs for a lumber yard and a drugstore for many years and preached on Sundays. He still serves as the minister for the Greenwood Church of Christ, a rural congregation in North Texas.

What I didn’t realize until we hit the road for our 600-mile drive to the lectureship was that Dad hadn’t returned to Freed-Hardeman since earning his degree four decades ago.

He just hadn’t had an opportunity.

In recent years, my work has taken me to Freed-Hardeman several times. But I enjoyed seeing the campus through Dad’s eyes.

“It’s changed so much,” he kept telling me, pointing out various buildings and landmarks that weren’t there when he was a student.

A hit song by Kenny Chesney puts it this way: “Trust me, friend, a hundred years goes faster than you think. So don’t blink.”

Exactly how fast does 100 years go?

I find it amazing that these two people — both so important and precious to me — entered this world a century apart.

I find it amazing that these two people — both so important and precious to me — entered this world a century apart.

I’m reminded that, as James 4:14 says, we “are a mist that appears for a little while and then vanishes.”

But oh, what a wonderful reunion we’ll have someday in our home above the clouds.