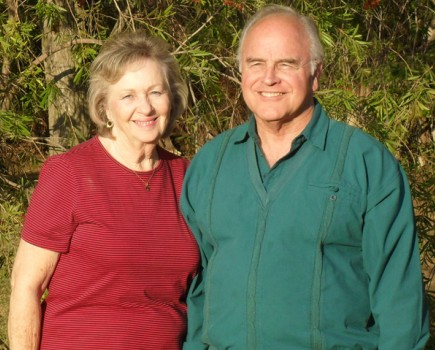 A golden anniversary for missionaries

The church in South Africa.

Bobby Ross Jr.
BENONI, South Africa — In the 1950s, a Texas girl named Donna Whitaker met Al Horne, a South African, at Abilene Christian University.
She had trouble understanding him because of his accent, but they dated and fell in love on the West Texas campus.
“Even when he proposed to me and asked, ‘Will you marry me?’ I thought he said, ‘Do you want to go play table tennis at the student recreation?’” Donna said. “And I said, ‘Yes.’ And he said, ‘When?’ And I said, ‘Well, the sooner, the better.’ And I found myself getting married.”
Her punchline delivered with perfection, she grinned at her husband of 53 years — seated on the couch next to her in their home east of Johannesburg.
A half-century ago, the young couple drove up the face of a mountain and began full-time mission work in Tanganyika, now Tanzania, in East Africa.
Five years later — in 1964 — they moved to Benoni with a dream of starting a Bible college at Africa’s southern tip.
Al Horne and Eldred Echols, the late missionary who converted Horne asa teenager, formed Southern Africa Bible College to “train Africans toevangelize Africa.”
“Now,” Al Horne said, “more than 600 graduates and former students are proclaiming Christ across the continent of Africa.”
When the Hornes became missionaries 50 years ago, a new congregation onthe west side of Houston — the Memorial Church of Christ — agreed toprovide part of their support.
That support kept increasing until the Memorial church became thecouple’s sponsoring congregation and the Bible’s college’s leadingfinancial backer.
While growing to more than 750 members, the Memorial church has maintained its early  commitment to missions, the Hornes said.
“I think it’s Al and Donna’s work ethic, the desire that they have toreach lost souls, the energy they continue to put into it despite a lotof difficulties,” longtime Memorial elder Cecil Rix said of why therelationship has flourished so long.
To provide for the college’s long-term future, the Hornes and theMemorial church have launched a $4.5 million endowment campaign called“Spreading the Flame.”
A few years ago, the Hornes — parents of four, grandparents of 14 andgreat-grandparents of four — returned to the U.S. to help care forDonna’s mother, who later died. Al Horne preaches for the Riversidechurch in Kerrville, Texas, but remains active as the Bible college’spresident. The Hornes still spend two months a year in Benoni. Alwishes it were more.
“Our deal was — and he wasn’t aware of this until a few years ago — Iwould happily spend 48 years with him in his country,” Donna Hornejoked, “and then he would come spend 48 years with me in my country.
“And after two years, he’s trying to renege. What kind of deal is that?”