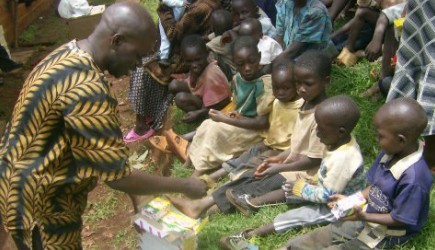 When the people of Haiti can’t afford rice, some resort to cookies made of salt, vegetable oil and dirt.
The light-gray discs have no nutritional value and contribute to stomach worms, said David May, a church member in Minnesota who makes regular trips to the impoverished nation.
“But they keep a child from crying when he is hungry,” he said.
Hikes in food prices triggered riots in Haiti recently. In the capital, Port au Prince, a 100-pound bag of rice sells for $65.75 — more than twice what it was five months ago, said Roberta Edwards, a church member who directs a feeding program for hungry children.
Drought, unrest and gasoline costs have raised food prices around the globe. In developing nations, churches
struggle to meet the swelling sea of need.
“So many innocent people are suffering,” said Julius Mwambu, a minister in Mombasa, Kenya. The price of cornmeal has doubled since Kenya’s post-election violence. “And to make things worse, there is no rain,” he said.
American churches that operate food pantries and relief ministries also are feeling the pinch.
The Mount Hope church in Webb City, Mo., is a host site for Angel Food Ministries, a Georgia-based nonprofit that buys food in bulk and sells it at a discount.
The price of an Angel Food box rose from $25 to $30 in February.
“Immediately, we saw a drop-off in orders,” Mount Hope minister Michael Lum said.
The falling value of the dollar against foreign currencies also hurts ministries that collect funds from U.S. members to buy food overseas. Amarillo, Texas-based Christian Relief Fund supports Edwards’ program in Haiti and similar efforts in 21 other countries. In the past year, the dollar lost about 9 percent of its value against the Kenyan shilling, said Julie Rawlins, African projects manager for the church-supported ministry.
In nearly the same amount of time, the price of rice and beans rose 20 percent in Kenya.
The price hikes make crucial good stewardship of donor dollars, Rawlins said. But even with the best management, “It is a continuing challenge to maintain the same level of humanitarian aid as costs rise.”
GARDENS AND GLUTTONY
The Mount Hope congregation plans to help its members decrease their grocery bills — and increase fellowship among age groups — by creating a “generation garden” on four acres of church property.
Gary Morrison, an elder of the Missouri church, got the idea while teaching a Bible class for older congregants.
“I said to myself, ‘Look at the skills and knowledge and wisdom in these people that’s not being used,’” Morrison said.
He and other church leaders developed a program that would help the older members, many of whom lived through the Great Depression, pass their skills to young believers.
In addition to gardening, the church will offer training in cooking, sewing, home repair and engine maintenance. Saving money on food is a side benefit of the program, but the economy did play a role in the church’s decision to start the program, deacon Andy Wilson said.
“From all appearances, we’re on the verge of all families needing to have a garden,” he said.
Although churches are increasingly aware of a global food crisis, preachers in Western countries seem unwilling to talk about what Jennie Keeran calls “the ‘g’ word” — gluttony.
Hunger is a global problem, she said, but statistics show that the United States has the highest rate of obesity in the world. Obesity rates also are rising in Canada and Europe.
“It amazes me that, as the world is literally starving to death … Christians are killing themselves with gluttony,” said Keeran, who launched ministries for the homeless in the Canadian cities of Vancouver and Calgary.
As part of addressing global hunger, church members should repent of gluttony and “openly talk about the fact that this is not only a problem of physical health, but spiritual health,” Keeran said.
In Cape Town, South Africa, Christians are working to turn their worship services into an opportunity to help the hungry, missionary Roger Dickson said. Church members who meet in their homes plan to follow Jesus’ instructions in Luke 14:13 to invite the poor to join them as they remember their savior.
“Every Sunday assembly, therefore, would be a soup kitchen,” Dickson said. “The point is … to focus on the poor, crippled, lame and blind — not just ourselves.”
Although travel is expensive, Bob Valerius urged church members to visit fellow Christians in developing nations, assess their needs and form partnerships to help them.
“I also think American Christians really need to look at their needs and ask God to guide their decision making,” said Valerius, a missionary in Cap Haitien, Haiti, who works with Abilene, Texas-based Haitian Christian Foundation.
“If my brothers and sisters are starving, do I really need to buy that 50-inch HDTV? Do I really need another cruise?” Valerius said. “I can’t answer those questions for anybody. But they need to be asked — prayerfully, with an open heart.”