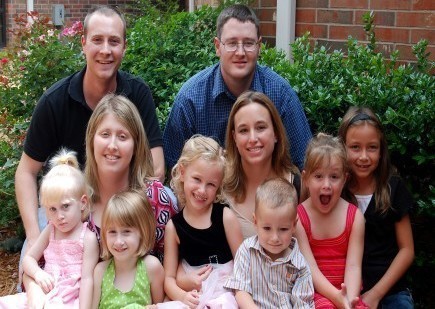 A gift of sacrifice and love

Bobby Ross Jr.
Oklahoma mother and church member donates a kidney to save the life of her close friend and sister in Christ.

MUSTANG, Okla. — Kayla Balliew is the kind of faithful Christian woman who goes out of her way to serve friends in need.
Be it babysitting or preparing a meal, the 24-year-old mother of four is always eager to help.
Even if that means donating one of her kidneys.
“I’ve always quoted, ‘Let us not love with word or with tongue, but in deed and truth,’” said Clyde Slimp, preaching minister at the Lakehoma church, referring to 1 John 3:18. “But I understand it a little better now.”
At the 300-member congregation southwest of Oklahoma City, older men choke up while leading prayers mentioning Balliew’s recent life-saving gift to Rachel Synco, 23, mother of Eve, 5, and Naomi, 2.
“Their love for each other has deeply moved everyone at the Lakehoma church,” Slimp said. “It has raised the bar on how to obey the command to ‘serve one another in love.’”
THE ROLE OF FAITH
It’s all part of a heavenly plan.
That’s the only way Balliew — mother of Heather, 9; Libby, 5; Addie, 4; and Luke, 2 — can explain the circumstances that led to her kidney donation.
“I mean, I’m from Massachusetts. This is about as far as you can get me out of my comfort zone,” said Balliew, whose Coast Guard husband, Richard, transferred to a small training center in the landlocked Sooner State two years ago.
“Just the fact that we moved here when we did, and everything just happened with Rachel, and I just happened to be the same blood type,” said Balliew, who grew up in the Cape Cod church in Marstons Mills, Mass. “There’s no way that you can’t see God’s hand in it.”
A FRIENDSHIP IS BORN
Soon after Balliew moved to Oklahoma, she met Synco at the Lakehoma church. At a fellowship gathering for young families, Synco’s husband, Zach, brought newborn Naomi to her and said, “She wants Mom.”
“I’ll take her,” Balliew said, reaching for the baby.
After that first meeting, the young mothers bonded while caring for their infants in the church nursery on Sunday. They taught 3-year-olds together in the church’s Tuesday and Thursday preschool program.
Not long after they met, Synco’s health deteriorated as a result of complications during her second pregnancy.
As Synco juggled doctor’s appointments, dialysis and other demands, Balliew stepped in frequently to babysit her girls.
When Synco was 10, her father had donated a kidney to her.
Now, a dozen years later, the native Oklahoman’s kidney was failing again. But she felt certain her mother would be a suitable match for a replacement.
Her friend prayed for that, too.
“I was ready to help with the kids so that they could get the transplant done,” she said.
LOSING HOPE
When tests revealed that her mother’s kidney was not a match, Synco was shocked.
Through her pregnancies and blood transfusions, Synco had built up antibodies that clashed with her mother’s kidneys. Still, Synco held out hope that another family member might share her blood and tissue types and meet other medical criteria.
After her mother, five of Synco’s relatives were tested.
Five were rejected.
“Every time I heard, ‘They’re not a match,’ it was like, ‘OK, but that’s one step closer that I’m not going to get that chance to live and watch my girls grow up,’” Synco said.
CHEERS AND TEARS
As Balliew commiserated with her friend, she learned that they shared a blood type — O.
She volunteered to go get tested herself to see if her kidney might be a match.
At least four other Lakehoma church members made the same offer, Synco said.
Finally, after relative after relative failed to turn up a match, Synco agreed to let Balliew and another church friend, Rachel Meinershagen, get tested.
When Balliew got the call that she was a match, her hands wouldn’t stop shaking. She first tried calling her husband, but he didn’t pick up. Unable to contain her excitement any longer, she dialed her friend’s number.
Naomi was sleeping on Synco’s lap when she picked up the phone, so she couldn’t jump up and scream. But
tears filled her eyes.
Not everyone understood Balliew’s willingness to donate her kidney. Some loved ones told her she’d lost her mind.
“You’ve got four children,” one person reminded her.
“Nobody will think less of you if you don’t do this,” another said.
But as she and her husband prayed for God’s direction, Balliew couldn’t get Synco’s children out of her mind.
If she could give Eve and Naomi the chance to grow up with their mother, she’d do it.
‘THANK YOU, LORD’
The day of the surgery, church members maintained a prayer vigil, taking 15-minute shifts that started before dawn.
After the successful operation, a hurting Balliew walked to her friend’s hospital room to check on her. It was then that Synco, seeing her friend smile despite her obvious pain, recognized the enormity of the gift.
“Kayla says this is all a God thing,” Synco said. “And that is the only way to look at it.”
Doctors look at creatinine levels to determine kidney functioning.
A normal level for an adult female is 0.6 to 1.2 milligrams per deciliter, according to MedicineNet.com. Any level over 10 may indicate the need for a dialysis machine to remove washes from the blood.
Before the surgery, Synco’s level measured a 12 for two years.
On the Monday afterward, it had dropped to 7.
Within a few weeks, it fell to 0.95 — news that unleashed all of Balliew’s emotions when Synco called and told her.
“I just lost it,” Balliew said. “I was like, ‘Yes, I’m just so happy. This is working out like it was supposed to.’
“Thank you, Lord,” she prayed again and again. “Thank you, Lord.”