For decades, Evans was one of the most prominent African-American leaders in Churches of Christ.

Jack Evans Sr., president of Southwestern Christian College in Terrell, Texas, for nearly 50 years and one of the most prominent African-American leaders in Churches of Christ for decades, has died. He was 81.

“A giant has fallen,” said Eugene Lawton, longtime minister for the Newark Church of Christ in New Jersey.

To my FB friends, friends of SwCC, and all concerned, my father Dr. Jack Evans, Sr., peacefully transitioned from this…

Evans led Southwestern, the only historically black college associated with Churches of Christ, from 1967 to the end of 2016, making him one of the longest-tenured presidents in American higher education history.

By 1973, he helped Southwestern obtain accreditation as a two-year junior college. In 1982, Southwestern began awarding four-year bachelor’s degrees in Bible and religious education. The college remained fully accredited by the Southern Association of Colleges and Schools. ​

“Live the life, and then preach the Word,” Evans said at a 2018 tribute to him at the Fifth Ward Church of Christ in Houston. “If you don’t live the life, then the Word won’t really help you.”

He voiced appreciation to those who paid tribute to him in his hometown of Houston.

“Now I know how those flapjacks feel,” he joked, referring to pancakes drenched in syrup.

In 2013, as Southwestern faced severe financial troubles, Evans focused on his faith in God.

Asked then if the college might be in danger of closing, he told The Christian Chronicle, “That’s been an issue ever since we’ve been in existence. … I have just worked here based on the faith that it would get better, and I still believe it. I don’t live under the threat or the fear of closing.”

Early in his life, Evans was one of the “boy preachers” for the famous black traveling evangelist Marshall Keeble. The boys traveled with Keeble, president of the Nashville Christian Institute in Tennessee from 1942 to 1967, to gospel meetings and delivered short messages before he spoke.

“Thousands of prominent ministers, church workers, former board members, heartbroken alumni, our students and Churches of Christ across America … join with the Southwestern Christian College family to mourn a giant and his legacy.”

“From the age of 16, Evans had been a towering figure in the pulpit,” said Southwestern President Ervin Seamster, who succeeded Evans in that post. “As his education and training continued … his reverent, booming voice became one of his most recognizable instruments. Word of his undeniable prowess in the pulpit and his impressive knowledge of the Bible preceded Evans wherever he traveled. His popularity skyrocketed. Everyone who saw or heard Jack Evans knew this man was something special.”

After his time at the Nashville Christian Institute, Evans enrolled at Southwestern, where he graduated in 1959. In 1963, the former student accepted positions Southwestern as dean and history professor. Four years later, the well-known preacher became president of his alma mater. Upon his retirement, he was appointed president emeritus, a title he held until his death.

“Thousands of prominent ministers, church workers, former board members, heartbroken alumni, our students and Churches of Christ across America … join with the Southwestern Christian College family to mourn a giant and his legacy,” Seamster said. “There will never be another Jack Evans Sr.”

For many years, Evans was the main speaker at the Crusade for Christ. Every two years since 1979, hundreds of members of Churches of Christ travel to a different major city for the national crusade, which features a door-knocking campaign and a weeklong gospel meeting. However, health issues prevented Evans from keynoting the last few crusades, including the 40th anniversary event in Fort Worth, Texas, earlier this year. 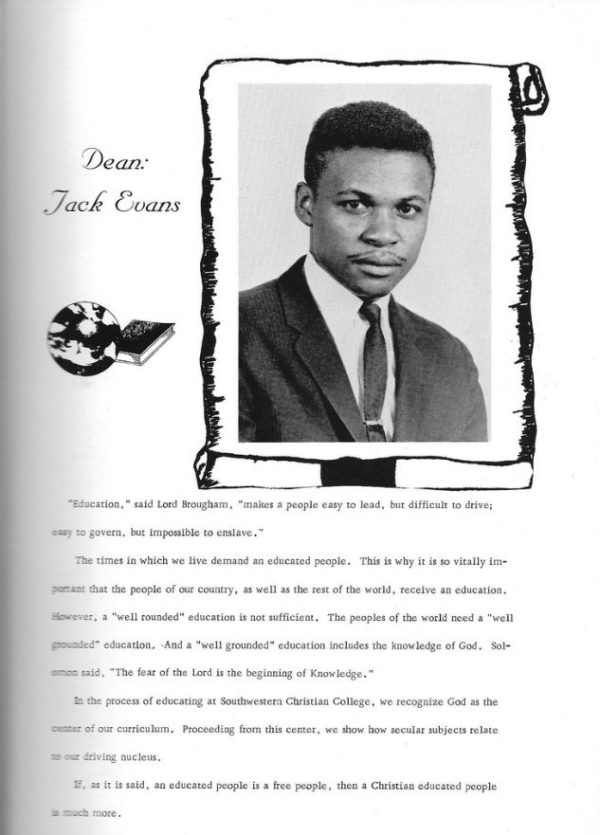 Jack Evans Sr. as dean at Southwestern Christian College in 1965.

Funeral arrangements have been made through Sacred Funeral Home in Cedar Hill, Texas. A memorial service is planned for 7 p.m. Friday, Nov. 15, at Southwestern. A celebration of life is set for noon Saturday, Nov. 16.