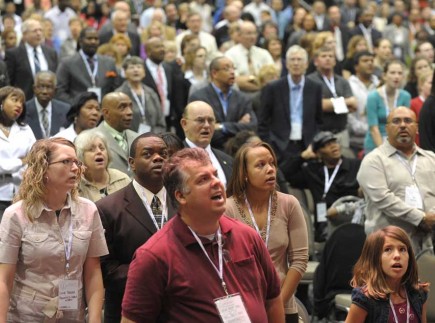 Jim Frost
CHICAGO — Large, ethnic neighborhoods with a vast array of cultural backgrounds span this city — Irish, Polish, Greek, Asian and Hispanic, just to name a few.
How does the Church of Christ look in this mix of heritages, races and languages?
Area leaders say it is a mirror image of the community, because Chicago area church members hail from every segment of the population.
Sixty-one congregations came together recently to celebrate social diversity and sameness in Christ at the
Chicago Celebration, an areawide gathering for worship, song and fellowship.
“This gives us a much greater chance to be effective in our quest for unity,” said event co-chair Rich Little, minister of the Naperville church, a 700-member congregation that is 65 percent white, 25 percent black and 10 percent Asian and Hispanic.
Deuteronomy 6:4-9 was read as a call to unity. Songs were projected on two screens in front of the auditorium, one in English and one in Spanish. Everyone sang together, voices blending in a harmony that transcended language.
After a meal, participants browsed exhibits and exchanged ideas for ministries and projects.
Ricardo Barrera, minister at the Elgin Iglesia de Cristo — Spanish for “Church of Christ” — said the Chicago Celebration opened a door for the Spanish-speaking congregations.
“Last year … was the first time we did something combined with the English-speaking churches,” Barrera said. “It is great to see what is out there, what we can reach out to, how many resources we have.”
Leonardo Gilbert, minister at the Sheldon Heights church, a mostly black congregation in Chicago, said natural or geographic barriers exist in society, but they can be overcome.
“At events like this we have to make a conscious effort, a mindset, for people to come together,” Gilbert said. “This is a beginning of the things that we can do together. Even in diversity, we can bring unity, and the thing that unifies us together is God.”
Little said the key is cooperation, both on leadership and congregational levels.
“If people can have an identity shift that begins at this event and continues through the year in their churches, they begin to look at each other differently and say, ‘Yes, you are not the black church in Chicago, but you are a congregation of brothers and sisters in Jesus Christ with which I have a lot in common,’” Little said.
Plans are already under way for Chicago Celebration 2009. It will be Nov.14-15 at The Forum at the University of Illinois in Chicago.