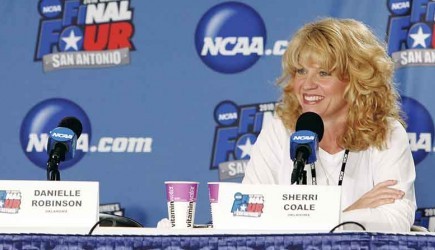 Lynn McMillon
This year, March Madness is a milestone for Sherri Coale. Considered one of the best basketball coaches in the nation, she celebrates 15 years as head coach of the University of Oklahoma’s women’s program.
Coale fell in love with basketball growing up in Healdton, Okla. She graduated summa cum laude from Oklahoma Christian University in Oklahoma City, where she played basketball and was named an Academic All-American.
In 1990, she became coach for the girls team at Norman High School in Oklahoma. In seven years with the Tigers, she chalked up a 147-40 record. Her teams won two state championships.
In 1996, she took on the challenge of rebuilding a women’s basketball program in turmoil at OU. Her teams soon became national contenders. In 2002, OU became the first Big 12 Conference team to advance to the NCAA Final Four, appearing in the national championship game.
Since then, her Sooners have won six regular-season Big 12 titles and four Big 12 tournament titles. They’ve made 11 straight appearances in the NCAA tournament.
A woman of deep Christian faith, Coale and her husband, Dane, have been married 24 years and have two children — Colton, 19, and Chandler,14. They are longtime members of the Westside Church of Christ in Norman.