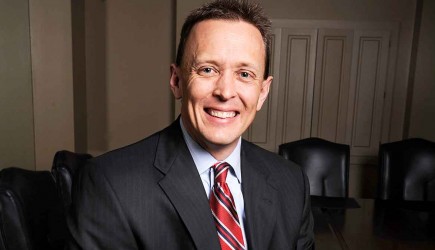 A conversation with Phil Schubert

Lynn McMillon
Phil Schubert has spent much of his life preparing for the presidency of Abilene Christian University, a role he assumed June 1.
After completing a bachelor’s degree in accounting at ACU in 1991, he became a Certified Public Accountant.  He later completed an MBA at Duke University and an education doctorate at the University of Pennsylvania, with a concentration in higher education management.
Schubert, 40, worked for the accounting firm Arthur Andersen and Co. from 1991 to 1993, when he joined ACU.
At ACU, Schubert has served in several roles, including director of student financial services, chief financial officer and vice president for finance and administration. Most recently, he served as executive vice president.
In recent years, Schubert renewed the marketing, recruiting and university relations departments, resulting in the largest one-year increase in new student enrollment in more than a decade.
Schubert also led the development of the university’s strategic plan for 2009-2013, known as “21st Century Vision.” This is the overall plan that will guide ACU’s development in coming years.
Schubert was selected as the new president of the 4,800-student university after a yearlong search. He succeeds Royce Money, who served as ACU’s president for 19 years.
Schubert and his wife, Jamie, have been married for 17 years. They have three children: Sydnie, 13; Mason, 11; and Ella, 3. They are members of the Southern Hills church in Abilene. Phil is a golfer, and Jamie plays tennis.
What relationship to Churches of Christ will ACU have under your leadership?
ACU was founded with Churches of Christ as its primary constituency. That’s not going to change. Churches of Christ have been, are today and will be in the future ACU’s core market.
The university’s purpose is not only to educate young men and women to be mature Christian servants and leaders, but also to serve as a resource to the church.
As such, ACU will expand its presence in and support of Churches of Christ across the country while continuing to attract students from a wide variety of denominations and faith. In doing so, ACU will always maintain its core identify as an institution of higher learning.
While serving the church, we will neither attempt to be a church nor replace the church. We will seek both to lead and to follow in our efforts to strengthen the church and serve as good stewards of the tremendous resources God has provided.
Most colleges founded on religious principles do not remain true to those for even a century. What direction will you plot for ACU?
Several books have been written about institutions of higher education that started out with a strong Christian commitment but later, in a quest for academic excellence, ultimately gave way to secular influences, thus profoundly changing each institution. Some have even suggested that the coexistence of true academic excellence and a real faith commitment is virtually impossible to achieve. I’m certainly aware of this research.
On the other hand, there are those who believe that an institution of higher learning may at one and the same time be Christian in its core beliefs and excellent in its academic standards.
To be sure, institutions able to achieve such a status are a small and distinctive breed. ACU will be such an institution.
Are the founding purposes of ACU relevant for today’s church and society?
ACU’s mission is to educate students for Christian service and leadership throughout the world. Never has that mission been more relevant than it is today.
We live in a world that is starving for men and women of strong values and selfless attitudes who live for a purpose beyond themselves. We need strong Christian men and women who are passionate about helping the marginalized within our society as well as being capable of leading the most sophisticated and educated of our world.
Preparing young men and women for such diverse callings is the purpose of ACU and should remain the purpose of Christian higher education.
What interested you in becoming president of ACU?
As the youngest of three boys, I grew up constantly aware of much of what was going on within Churches of Christ and on the ACU campus.
Both my parents as well as both my older brothers attended ACU, and my father spent virtually his entire career as a pulpit minister in the Church of Christ (after a short time as dean of students at then Oklahoma Christian College). I continued my family’s legacy at ACU, enrolling as a freshman in the fall of 1987.
What took place over the next four years was a transformational experience that helped to shape every aspect of who I am. I developed my own personal faith, determined what life values were most important to me and began my journey to make a difference in the world.
I experienced the value and purpose of Christian higher education in a way that was very personal. I love ACU, and I want to ensure that future generations benefit from the same experience.
What do you see as the next great challenge for ACU?
Our vision for building a national reputation for academic excellence while ensuring an unwavering commitment to the spiritual development of our students will prove tremendously challenging.
As discussed earlier, a number of historically faith-based colleges and universities have been unable to keep such a dual focus. ACU’s commitment to remain faithful to our spiritual heritage and our ability to remain relevant among higher education’s best institutions will define much of our future.