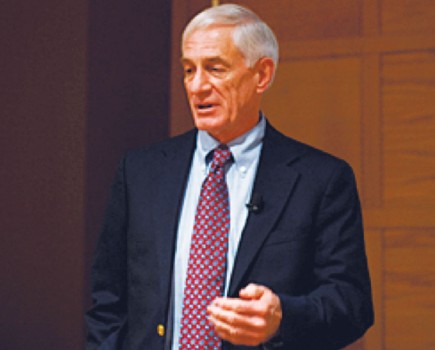 A conversation with Nobie Stone

Lynn McMillon
What does the ionospheric wake of an orbiting spacecraft have to do with the existence of God?
Everything, says astrophysicist Nobie Stone, whose research on the subject is studied by scientists around the world.
The laws of thermodynamics — which Stone relied on heavily during his years with NASA — fit hand-in-glove with the biblical creation account, he says. Stars grow old and die. The universe is expanding. It clearly had a beginning, but the Big Bang theory, which proposes that something came from nothing, violates these “sacred” scientific laws.
The creation account, meanwhile, allows for “input from outside of nature,” Stone says.
Stone, who earned a doctorate from the University of Alabama-Huntsville and worked at NASA’s Space Sciences Laboratory at Marshall Space Flight Center, served as mission scientist for two Space Shuttle missions. He has flown science experiments on eight space missions. Now retired, he serves as a deacon and adult Bible class teacher for the Mayfair Church of Christ in Huntsville.
He conducts seminars, titled “A Reasonable Answer for the Hope that we Have,” for young people from high school to early career-starters and parents.
“Interestingly, I have had older adults tell me that the material strengthened their faith or provided answers to questions that had troubled them,” he says. “Apparently, doubt has no age limit.“

What, in your formative years, contributed to your agnosticism?
My family was very religious. We attended church every time the doors were open and had a family devotion every night.
But there was a problem — Bible lessons at church were shallow, and “irreverent” questions (such as, “How do we know the Bible is true?”) were not welcome at home.
I left for college with many unanswered questions — and new questions arose during my undergraduate years.
In history, we studied the ancient Egyptians and their gods, the Greeks and their gods, the Romans and their gods and the Hebrews and their God. I had to ask, “What’s the difference?” Clearly, the many were false, but the one I was to accept. Why?
I had no idea. I had no clue where to go for answers — or if they even existed. By the time I graduated, the questions had matured into full-fledged doubts.
What brought you back to faith?
It was the absence of God.
By this time, I had earned bachelor’s and master’s degrees in an advanced engineering science curriculum and was working at NASA on the Apollo program — preparing to send a man to the moon.
I should have been on top of the world. Yet something was missing. I would lay awake at night pondering the meaning of life and what I should accomplish. I felt a gnawing emptiness.
Solomon was right. Life without God is empty and meaningless — and no human endeavor, no matter how grandiose, can change that.
And so began my search for God — enabled by the untiring efforts of a Christian mentor, Clyde Jones, who patiently endured my many questions. If he didn’t have an answer, he would bring me a recorded lecture or something to read. Finally, I owe a great deal to the loving influence of a Christian wife.
How has your scientific and technical training affected your faith?
Science trains one to be a good observer, to gather and evaluate evidence, to construct logical conclusions and follow where they lead. This process served me well in evaluating doubts.
My career also has given me an inside view of scientific thought and findings. A primary academic motivation for space exploration was the question, “Are we alone?” Many were convinced that we would find life elsewhere in our solar system. Yet the most outstanding find from four decades of space exploration is the very special nature of Earth.
How do you see science and the Bible relating to each other?
Some have taken a theological position that religion and science operate in two separate spheres and have no logical contact. This position is simply untenable in today’s secular world — and inadmissible if we believe God to be the almighty Creator.
My personal view is that God is the architect, creator and sustainer of all nature. Since he also is the author of revelation, then revelation and nature are both products of the same author and, therefore, must be mutually consistent. If they are not, then we have misinterpreted our scientific observations or misunderstood revelation — examples of both exist in history.
So I do not see science (the study of nature) and the Bible in conflict. I do see inconsistencies between some scientific theories and revelation.
What do young people need to know about science?
Science should be an objective, rational search for an understanding of how nature (the material universe) works. It deals exclusively with phenomena that can either be observed with our senses (sight, touch, hearing, for example) or logically extrapolated from those sensory observations.
As a result, science has limitations. It cannot address questions of “Why?” in terms of intelligent motivation, since these types of questions are not physical. And it does not work well with single-occurrence phenomena (beginnings, miracles) since they, by definition, are not repeatable and, therefore, cannot be studied under controlled conditions.
Science is not a worldview but a tool with which to understand the world. The great classical scientists — Newton, Galileo, Kepler — believed that they were, through science, viewing how God created the universe.
Scientism, as opposed to science, is a worldview. It claims that nothing exists beyond the material universe and its laws (materialism) and that any question worth discussing can be answered by the scientific method. It is faith in science. As a result, science is given sway in areas far beyond its logical boundaries.

What fields, other than science, have you found important to faith?
God has revealed himself to mankind in three ways — through his creation, revelation and visitation (Jesus, who was God incarnate).
Therefore, we find evidence in three primary areas: in science — as we unfold how God created the universe; in history — the life, death, and resurrection of Christ are historically documented events; and in Scripture — its content and consistency.
Scripture contains understanding and knowledge that is virtually impossible for a people, living some 3,500 years ago, to have developed. Moreover, it was written on three continents over a period of some 1,500 years by people ranging from former slaves to kings.
Yet there is an incredible consistency and correlation between the Old and New Testaments (Abraham’s near-sacrifice of Isaac and God’s sacrifice of his Son, the deliverance of the Israelites from physical bondage through the waters of the Red Sea and our deliverance from spiritual bondage through the waters of baptism).
It is obvious that there has been orchestration. Yet considering the facts of their origin, who could possibly have done this?
How can we better prepare young people for life in our secular world?
There appear to be three primary reasons why young people abandon faith. Firstly, speaking for myself, it was a prohibition on questions and an almost total void of answers. Secondly, many young people did not see real dedication to faith at home in their formative years. Thirdly, adolescence is a time of uncertainty and poor self-esteem for many young people. It is critical that they feel accepted and a part of something. Regrettably, they often are shunned and ostracized by their peers at church.
We should, therefore, provide an atmosphere where absolutely no earnest question is considered irreverent or unacceptable. And rational answers must be given. Educate parents concerning their critical modeling role. Perhaps this will strengthen teenagers’ faith — and ensure that every teen feels at home in church.