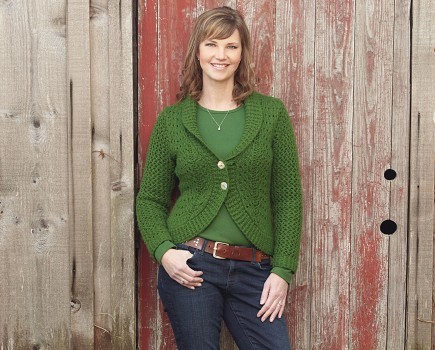 A conversation with Missy Robertson

Lynn McMillon
Despite her newfound celebrity status, Missy Robertson is decidedly down-to-earth.
Marriage to Jason “Jase” Robertson made her an integral part of the Robertson clan, stars of the megahit reality show “Duck Dynasty” on the A&E Network. The series films six days per week, and Missy is often seen helping her mother-in-law, “Miss Kay,” and sister-in-law Korie expand the women’s line of the family business — Duck Commander/Buck Commander.
Like her husband and three brothers-in-law, Missy Robertson grew up in a strong Christian environment in West Monroe, La., where she has attended the White’s Ferry Road Church of Christ all her life. Her father, Larry West, took the family on many of his well-known “We Care” evangelistic crusades.
For 13 years, Missy attended Monroe-based Ouachita Christian School, where her mother, Peggy, was a teacher. All three of Missy and Jase’s children attend the school, where older son Reed plays football and baseball. Younger son Cole plays baseball, and daughter Mia is in third grade.
Active in church activities, Missy also is involved in the Ch-Yo-Ca church youth camp, where she serves as crafts director. She cites faith and family as the most important aspects of her life.
What challenges does the fame of “Duck Dynasty” present to your marriage?
We have a very strong marriage. There’s not a whole lot that has gotten to us in our 22 years. I think it’s because of the way we were raised and because of our faith.
It’s very rare that a couple like Phil and Kay would have four boys and all of them be married to their original wives for as many years as they have been.
And, of course, my parents have been married to only each other. So, when we got married, both Jase and I knew it was for life and for eternity.
Of course, when you’re getting married at 19 and 20, who can anticipate anything? Not that we haven’t had challenges, but there’s never been a question that we weren’t going to be together for the rest of our lives.
People actually target him, thinking “he’s going to be mine one day.” But they don’t know about our faith in God, and that is not an option for us. Truly, we are still highly in love with each other.
He still makes my heart skip a beat.
What do your children think about all the attention?
Our kids have done great with it. But it is definitely a day-to-day challenge because they are also on social networks. I have to monitor what the world is tweeting to them, what they’re putting on their Facebook walls and make sure that they are responding appropriately. We have many talks in our house about how to handle situations.
One thing about the Robertson family — there is nothing that is taboo to talk about. I wasn’t raised that way, but they definitely were. Everything is on the table. You have a problem, we’re going to lay it out, and we’re going talk about it. And nobody’s going to bed until it’s ironed out.
We have a lot of meetings in the late-night hours at our house because our children are our No. 1 priority. If we get famous and rich and lose our kids, it was for nothing.
Do you attend church regularly?
Yes, we do. A large part of our lives is involved in our church family. That’s not just something we say. It’s not just a card that we punch on Sunday morning. We’re very involved in each other’s lives as brothers and sisters in Christ.

How has celebrity affected your involvement in the church?
We are still very involved. We’re not there quite as often as we would like to be.

I feel like, though, because I’ve been there my entire life — Jason’s been there most of his life — that’s home.
White’s Ferry Road is home. We feel very comfortable, and people are comfortable with us.
I’ve sung on the worship team there for over 20 years. I miss it when I’m not there because I want to sing, and I love to worship.
But we’ve kind of brought a new energy, I think, to Sunday mornings, because of the fame. People want to come and see what’s going on at our church. Why would “Duck Dynasty” people go to that church? They’re interested in that.
So, if there’s any way that we can bring people to hear the Gospel of Jesus — because at White’s Ferry Road you’re going to hear the Gospel every Sunday — and if we can bring that to any visitors, we don’t mind that at all. People are driving from all over the country to come to our church to see what’s going on.
Has all of this given new opportunities to share the Gospel in places and with people that you otherwise wouldn’t have the opportunity to speak to?
Definitely! Jase has been traveling and speaking for several years. Phil has been doing that a lot longer than Jase, of course. But that’s because of the fame of Duck Commander, starting with Phil on the videos years ago, and his commanding presence and his knowledge of the Bible. People wanted to hear that.
Then it grew when “Benelli Presents Duck Commander” (the predecessor to “Duck Dynasty”) came out and they saw Jase. Now Phil and Jase are overwhelmed with so many requests. So it’s just grown over the past few years.
They have always had that desire and that skill. Now they’ve just been able to show the world who they really are, whose they really are and what they stand for.
How did the TV series develop?
Phil was doing commercials for the Benelli shotgun company. They had a script, but when the cameras came on, Phil said, “A shotgun, in my opinion, must have three things — boom, boom, boom.”
That was nowhere on their script, and they said, “OK, that’s a wrap.”
That commercial was up for many awards on the Outdoor Channel. They said, “I think we might be able to do a reality show.” That was the first step.
Of course, they did the first reality-type show on the Outdoor Channel, and the first year, it just zoomed straight to the top. And we swept their awards that year. They even had to make new criteria for how many awards one show could actually win after that because we pretty much took all the categories and all the fan favorites.
We did that for three seasons, and then it caught the attention of the larger networks.

Is “Duck Dynasty” true to life?
We are able to stay true to ourselves. There is an element in these guys from their raising by Phil and Kay — they are so self-confident. They are not arrogant. They are just very self-confident. They don’t care what anybody else thinks.
And I can say this about Jase: He does not care what anyone else thinks about the decisions that he makes.
And I think that is a huge element in the show, because so many people want to please the masses in these sitcoms and reality shows. They want the ratings — what should I say to get good ratings?
This family doesn’t think like that. Jason, I know, does not think like that. We are going to be true to ourselves first.
We didn’t know if the show was going to work. We sat around in a meeting with the Benelli company years ago and said, “Wait a minute — reality shows? They live on conflict, dysfunction and trying to get a rise out of each other, for the cameras. We are Christian people. We try to do the opposite. So, we don’t see how this is going to work.”
I’m not going to say that I am a prophet, but I just had a feeling that the audience was going to love the Robertsons — because they are not like anybody else I’ve ever been around in my life. They’re just not.
What is your goal with “Duck Dynasty?”
This has not been our goal in life — to have a TV show and to be rich and famous. I never saw that happening. I said I don’t mean to be a prophet. I felt some things, but I never saw this happening.
Now that it’s happened, we realize — and we realized when it was happening — this is something that God is doing for us and is doing through us. This is not because of us.
I feel a very weighty responsibility in this — sometimes overwhelming — where I feel like, I hope that we’re doing our father in heaven justice with this show. Because I want to make sure that, through the things God has given us, we can glorify him, we can lead people to him, we can show the sacrifice that he made with his son and how appreciative we are of that fact.
That’s the most important thing to us. And if it gets to where we’ve lost that perspective, please Lord, take this away, because we do not want this for us. We want it for him. So far, I truly feel like that we are doing some good for him. And we do hear that quite often.
What else would you like to say to your fellow Christians?
I want to say this for the Christian community — and that’s basically who’s reading The Christian Chronicle. We get a little criticism from the Christian community because they feel like we’re not saying enough on the show about Jesus, God and church. But we’re not here to preach. We want to show Jesus.
I hope the Christian community will understand that God is pushing this train, and we are not hiding that fact at all.
We’ve got to make sure that we are approachable by the world, and I think that the men — all of their lives — have done a great job in that.
Our show appeals to the world. Once we appeal to the world, we can attract them to Jesus, and that means being in the world, but not of the world, just like Jesus said. I hope folks will just be patient with us and really trust that God’s using us in this way.