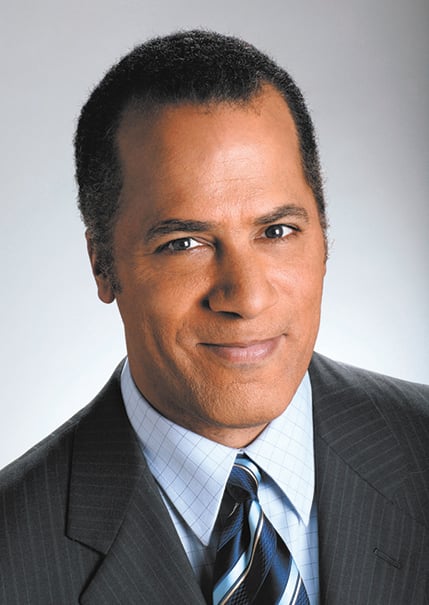 Most people who tune into NBC’s Today Weekend Edition probably don’t realize that, after co-anchoring the Sunday morning broadcast, Lester Holt rushes to the Manhattan Church of Christ to attend worship.
After telling the news of the day to millions of viewers on the top-rated show, Holt occasionally leads the fellow members of his congregation in prayer during the Lord’s Supper.
Inside the TV studio, he’s known as one of the hardest-working broadcasters on the air, appearing frequently on NBC and its cable station, MSNBC. The self-described “news junkie” is a frequent fill-in for Matt Lauer on the weekday edition of Today. He’s put in long hours as chief anchor for MSNBC’s coverage of the wars in Iraq and Afghanistan.
Despite national prominence, Holt has some decidedly “un-celebrity” habits. James Brady of Parade magazine said Holt was “the only TV anchorman I’ve ever interviewed who irons his own shirts.” Cleaners were too expensive, and they made the shirts wear out too fast, Holt explained.


Born in San Francisco, the son of a career Air Force NCO began working in broadcasting as a teenager. He dropped out of college when a CBS station offered him a radio-reporting job. He came to MSNBC from WBBM-TV in Chicago, where he spent 14 years.
Holt and his wife, Carol, have two sons, Stefan and Cameron. They live in New York City.
How important was your faith to you as a child?

I was born into a family of faith. Both my father and mother are very active members of the Church of Christ, so I was exposed to Christian teaching and values from the start.

I was baptized at the age of 9.
Tell us about your career. What sparked your interest in reporting?
My interest in broadcasting was sparked by an older brother who had dabbled in radio and TV. He left the business and is today an airline pilot, but I was sufficiently smitten by the business and pursued a career in radio.
One of my first jobs was as a weekend disc-jockey. Later the station offered me a full-time job if I would agree to be a news reporter. They outfitted my Jeep Cherokee with two-way radios and police and fire scanners, and sent me out chasing stories.
From that point on I knew I was hooked. Three years later, in 1981, I made the move to television and haven’t looked back.
What, if any, obstacles have you faced in pursuit of your career?
I have not faced any obstacles. However, this job does present many challenges. One cannot control the timing, location or magnitude of news events. Therefore the job can often overtake other things in a person’s life, and upset the balance between family, church and work.
You’ve reported from many of the world’s hot spots – Somalia, El Salvador, Iraq. Did you find them faith-affirming or faith-shaking?
My travels overseas, particularly to places of strife and poverty, have been faith-affirming. As painful as it was to witness starvation in Somali refugee camps, the unspeakable poverty in Haiti, or the repressed Iraqi citizens under Saddam Hussein, I always was struck by the strength of families who, world-over, ultimately want the same things: freedom, a roof over their head, food for their family, and a safe and secure livelihood.
We have much more in common than we often think. The people I have met in my travels are rarely the extremists, or political zealots who dominate the headlines. They usually are people who, like myself, just want the best for their families.


How have these field assignments impacted your views on faith?
On more than one occasion I have recited the beatitudes to myself as a reminder that rich and poor are relative terms.
My faith is affirmed by the people I’ve met along the way who put their own lives second to minister to the needs of the less fortunate, be they relief workers, missionaries or peacekeepers.
Nothing I have seen has caused me to question God. Often my experiences have produced just the opposite. I remind myself that sometimes we are so focused on the prayers God didn’t grant that we lose sight of the many more he did grant.
In your opinion, can a Christian be an objective news reporter?
I cannot separate my faith from who I am any more than I can the color of my skin. Both give me greater sensitivity to certain types of stories and also allow me to bring an insider perspective on some issues.
Yet, at the same time, my place as both a Christian and a journalist is not to judge. My success as a journalist is based on respecting the opinions and thoughts of those whom I cover. If I give voice to all relevant sides of an issue or debate, with proper context and perspective, then the viewers can formulate their own opinions.
While it would be disingenuous to suggest I don’t hold strong opinions on the issues of the day, I do not believe my newscast should serve as a bully pulpit.
Tell us a bit about your role at the Manhattan Church of Christ. What do you like best about the congregation?

Christian visitors to Manhattan often are surprised that this big city is home to such an active and vibrant Church of Christ congregation. From time to time I lead communion meditation and perform Scripture readings from the pulpit.

My biggest challenge is, as host of the Sunday Today show, getting to church on time! Though breaking news will sometimes keep me in the studio, I can sometimes be done by 10 in order to make the second Sunday morning service.
What I appreciate about the Manhattan Church of Christ is its diversity of members who come from a cross-section of neighborhoods, and from a variety of ethnic and racial backgrounds.
I also am pleased to belong to a work that embraces urban missionary work, an area that I believe is critical to the growth of the church outside the typical Bible strongholds.
Matters of faith seem to be making headlines more frequently these days. Do you agree? If so, how do you see this emphasis impacting our lives?
I was delighted and proud that NBC News recently aired a series of reports on faith in America. It is an area that media have, in the past, avoided. The series was a recognition that faith is playing a larger role in American life.
From the recent presidential election to the issue of gay marriage to the Terri Schiavo case — and of course the death of the Pope — Americans are talking about faith openly more than ever.
It is a story that cannot be ignored, and I know we will be devoting more and more time to it.
You’ve spoken of the need for senior news people to act as mentors for the younger generation of reporters. How does this relate to your faith?
I was fortunate to have a number of people who took me under their wing when I first got into the business, and I try very hard to be that person for certain young people who show aptitude, a strong work ethic and promise.
While journalism can be learned in school, a lot of what makes a successful reporter involves developing instincts, intuition and sensitivity. One of the concerns I have expressed in the past is that the rapid growth of broadcast news outlets means young people coming into the business are being quickly pushed upward without the benefit of the kind of personal guidance from the “old hands” that was common when I came along.


One of the things I pray for in my personal life is wisdom. I believe wisdom, whether on matters of faith or in a professional setting, is something we don’t fully develop on our own.
How do you seek to achieve balance in your work life, home life and faith? How do you cope with the time constraints and other stresses of the job?
The demands of my faith, family and job are sometimes overwhelming, and I cannot say in the past I have balanced them well all the time.
I am one of those people who sometimes tries too hard to be all things to all people. This year I have tried with more success to set priorities, limits and to learn to say “no.”
It’s amazing how much time that simple word opens up for the things that are truly important in life. 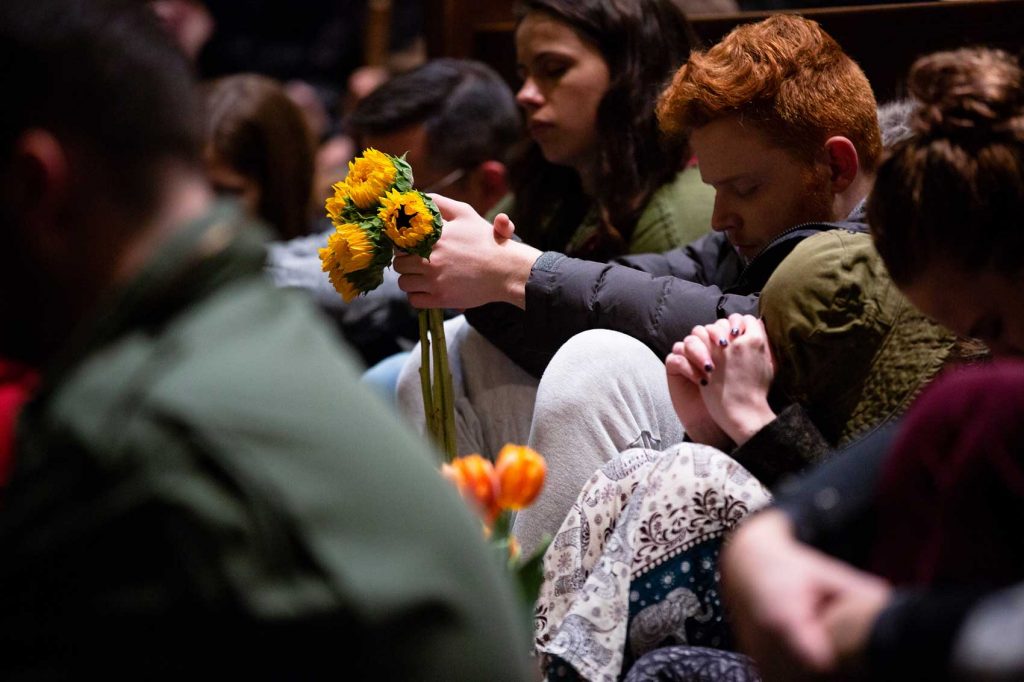 On Saturday, a man entered a synagogue in Pittsburgh and… 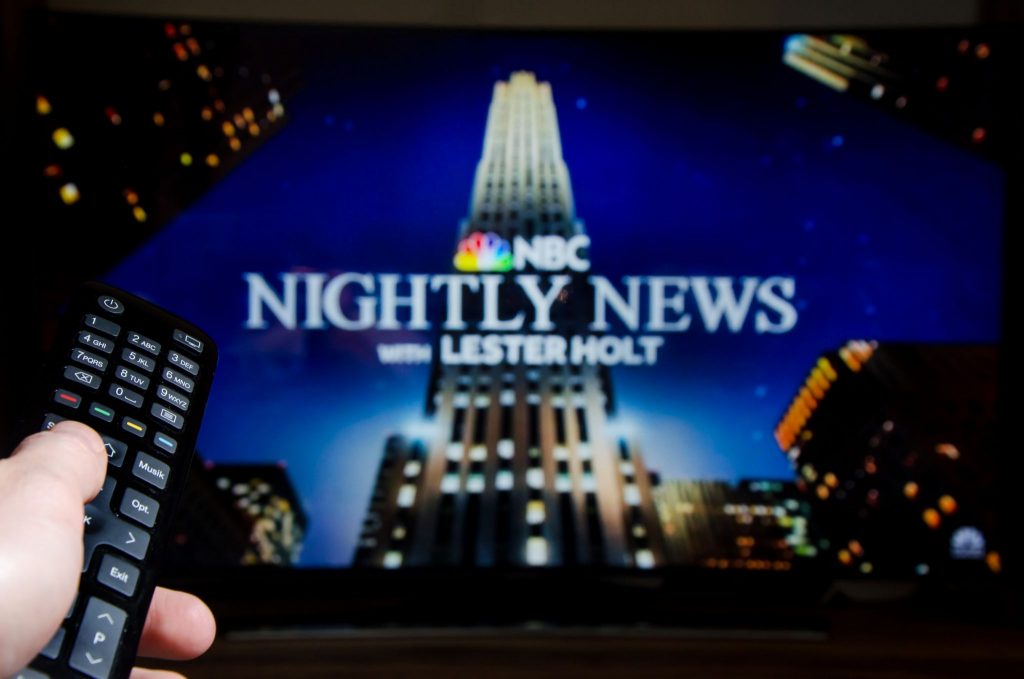