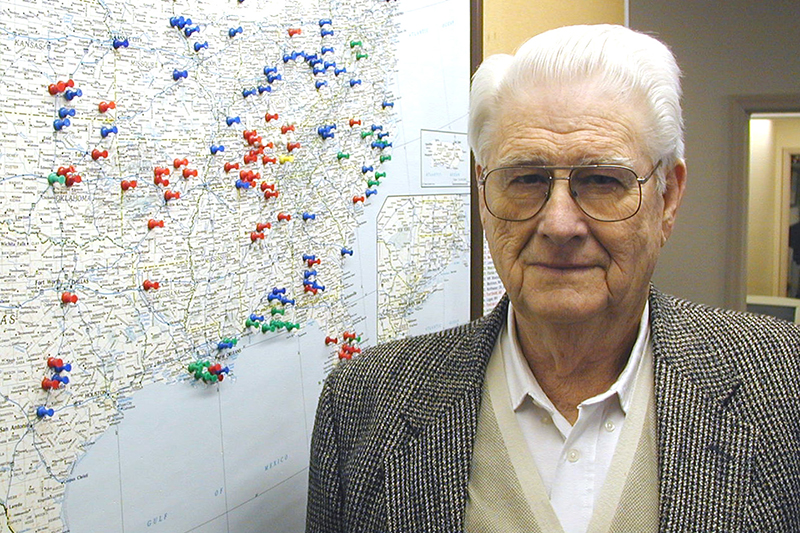 A Conversation with Joe Dudney

‘Can you believe he is 81 years old? He can outrun and outwork anybody in this building,” says one of Joe Dudney’s co-workers at Churches of Christ Disaster Relief Effort (CCDRE), Nashville, Tenn.

When Dudney became vice president and executive director of CCDRE in 1991, he had just retired as manager of the Tennessee Crop Improvement Association, a state agency that works with the U.S. Department of Agriculture and others.

He was 67, but genuine retirement wasn’t even on his radar screen. He willingly took on the operation of a new disaster relief ministry.

The first major disaster CCDRE served was monstrous Hurricane Andrew. Dudney says he and his staff learned much. They arrived with a loose load of supplies, and soon realized that their efforts were inefficient and largely unhelpful.

Today the ministry has a clear bead on the most efficient and effective ways to buy, stock, package, transport and distribute aid supplies. CCDRE’s goal is to help the greatest number of people possible while minimizing the burden on local congregations. It is governed by a board of directors and an advisory board of people from 22 congregations.

In its 13-year history, CCDRE has sent $50 million worth of goods to 239 disasters. The much-needed supplies travel in distinctive white tractor-trailer trucks with “Church of Christ Disaster Relief” in green letters — showing that help, in the name of Jesus, is on the way.

Dudney, who was born on a farm in rural Tennessee, served as an elder at the Brentwood Hills church, Nashville, for 21 years.

He and Doris, his wife of 57 years, have one daughter, Linda Baskins, and two granddaughters.

Why did CCDRE come into being?

In the late 1980s, groups from Nashville-area congregations were hand-delivering money and supplies to victims of natural disasters. Congregations from other states were doing the same.

The result was chaos. Among other things, huge piles of used clothing, dented and rusted cans of food, perishable food and other items had to be buried. None of it useful or needed. Also, cash was being wasted. Victims had to pay double or triple the retail prices for needed items when and if they were available on-site. Cash was often misused and often diverted to projects other than disaster relief.

Local congregations in the disaster area were simply overwhelmed with the need with little or no money to help victims.

In 1990, a Nashville group decided there had to be a better way to spend the Lord’s money. We started with a budget of $40,000. For the past few years we have spent more than $5 million each year helping victims all over the country.

What are the largest disasters CCDRE has served?

What have been the most difficult disasters to serve?

Probably, this fall’s hurricanes because four major ones — Charley, Frances, Ivan and Jeanne — wreaked billions of dollars in damage in only a few weeks.

What is the size of CCDRE’s staff?

The staff here numbers 13, but the heart of the organization is the volunteers from Middle Tennessee and Kentucky that work hard, long hours when needed.

On loading days, more than 300 workers show up. During the week, a regular group pre-package and sort supplies.

The board of directors and advisory board are also volunteers.

What do you do day-to-day to be ready when a disaster strikes?

We are constantly buying supplies, prepackaging our specialized relief boxes. Maintaining a $6 million inventory of goods takes six people full-time, plus we have routine maintenance on equipment.

Our main relief items are:

The family food box, worth $125, will feed a family of four for four or five days.

The baby supply box, worth $60, provides items for infant care for a few days.

A personal care and hygiene box contains items worth $60.

A bucket of cleaning supplies provides $60 worth of items.

Where do the money and the supplies come from?

Our financial support comes from churches, individuals, businesses and various agencies. About 15 percent of what we send to victims is donated.

We must purchase 85 percent of our supplies to fit the relief boxes. We have buying power. We buy by the truckload from manufacturers at cost or below.

For every dollar donated, we can send more than $3 worth of supplies. We only send new clothes, bedding, appliances, furniture and food. We can do more with a donated dollar than any other way of helping. The family food box contains about 40-plus items with a retail value of $125. We spend less than $36 to fill it.

After service to a disaster area is finished, what then?

We restock right away, anticipating future needs. We have never been completely out of stock. Sometimes we scramble to replace an item or two, but we get the job done.

How are the relief supplies shipped?

Items are rushed by our trucks to distribution centers set up by local congregations at or near the disaster sites.

New appliances, beds and truckloads of water are drop-shipped to the these centers. We try to send what the victims need at the time. We have sent a lot of mosquito repellent to Florida and water purification tablets to flood areas.

What kind of reception has CCDRE gotten from people in the local areas?

Our feedback from local congregations has been outstanding. The church does the work and the Lord gets the credit. We do cooperate with local officials through the local church only. If there is no Church of Christ in a town we move to a nearby town and work from there.

What aid do other religious groups send, and how do we stack up?

We have heard that other religious groups do send aid in one form or another. We are unique in that what we have is instantly distributed and can be used immediately. Everything is prepackaged.

We do not run “soup kitchens” or feeding programs, but if the local church sets up a program, we will supply pallets of food for cooking.

We think we stack up well against other religious groups as well as state and federal agencies. Many, many times the Federal Emergency Management (FEMA) people, the Salvation Army, Red Cross and others refer victims to us.

What do charities like the Red Cross or Salvation Army provide?

Unlike the Salvation Army and the Red Cross, we are in the disaster for the long haul. We may spend up to a year working in the area. Usually the other two pull out in a few weeks or less — especially the Red Cross. We’re told by other organizations and victims that our aid is superior.

How do you respond to the criticism that “you are only offering humanitarian aid and not evangelizing”?

We have proof that we’re doing both -— offering humanitarian aid in the Lord’s name as well as providing the local congregation tools to spread the gospel. By the way, every family food box has a New Testament tucked inside.

What are your dreams for CCDRE?

Our dreams for the Churches of Christ Disaster Relief Effort include growth -— that we become even better able to serve with more resources, a bigger facility, more trucks. My personal goal is that we double in size in terms of budget. That we spend more than $10 million annually instead of $5.6 million or better.