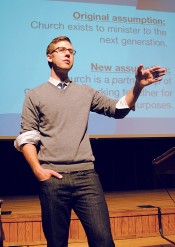 A conversation with David Kinnaman

Lynn McMillon
David Kinnaman has the ears of America’s Christian community and — what may be more impressive — the attention of secular media. He’s a go-to guy for the Wall Street Journal, CNN and the Los Angeles Times when it comes to identifying trends in the nation’s Christian population.
Kinnaman, 37, is president of the Barna Group, a Ventura, Calif.-based market research firm specializing in the religious beliefs and behavior of Americans and the intersection of faith and culture. George Barna, an accomplished author and seminar speaker, launched the firm in 1984 to provide research and support for churches and ministries. Kinnaman has served the Barna Group for 17 years.
Kinnaman’s landmark 2007 book “unChristian” described the increasingly negative opinions of non-believers toward Christian culture in the U.S. Coauthored with Gabe Lyons, the book has become a staple of pulpits across the nation. Ministers quote from “unChristian’s” troubling findings, stressing the need for people of faith to re-engage with a culture that sees them as hypocritical and irrelevant.
In his latest book, “You Lost Me,” Kinnaman focuses on the more than 60 percent of young people in the U.S. who went to church as teens and dropped out after high school. Surveying young Christians, ages 16 to 29, across the nation, the book identifies three groups — nomads, prodigals and exiles. Nomads leave the church while thinking of themselves as Christians. Prodigals no longer have faith nor connection with the church. Exiles still are connected but are torn between contemporary culture and the church.
Kinnaman and his wife, Jill, live in Ventura with their three children. They enjoy building with Lego toys and visiting Disneyland.

Why did you write “unChristian?”
The main point of “unChristian” was that Christianity has a negative perception in culture, particularly among non-Christians.
This was newsworthy because of the depth of those negative perceptions and the hostility among some of the young non-Christians towards Christianity.
Does “unChristian” offer any solutions?
We describe each of the negative perceptions — first, that there is often a biblical reason why they exist, and so our intent was not to throw the baby out with the bath water but to ask, “How does the Christian community navigate these tough cultural questions with truth and love?”
A prime example is judgmentalism. When one is judgmental, they use truth to separate, critique and point out people’s flaws. Biblical judgment is about reconciliation and truth. And so we talk about the fact that to shift from being judgmental is really to see people’s potential to be Christ-followers, to see the things that God’s wired in them for good in addition to their basic brokenness and sinful nature. Maybe the way to put it is this: Jesus was just as concerned with self-righteousness as he was with unrighteousness.
What constitutes a good spiritual experience for young people?
We need to look at the intent behind the programs and things that we offer.
Just because a young person is involved in church as a teenager doesn’t necessarily mean they’re going to stay involved, so we need to look at other things that might help them to make the faith their own. That can be many of the things we’ve used in the past — camps, curriculum, experiences, small groups — but I think we have to be careful.
They’re already as busy a generation as we’ve probably ever seen in terms of their commitments and media usage and other things. So they need help sorting through the noise of culture and the noise of busyness so they can become more connected to what the Lord is asking them to do.
What can older generations do to better connect with the young?
Be there for young people as a friend. We’re too interested in being a mentor, and they may not want a mentor. They may just want a friend.
All of us as older leaders are probably more connected with the young than we realize. They may be our children, grandchildren, students or other young people who are in our church. We need to have more genuine interest in them and recognize the role that we play in their lives.
Sometimes we’re hesitant as older leaders because we feel like we’re not as cool or as relevant or interesting to young people.
Yet we need greater trust in the fact that they’re listening, the fact that they want to be heard and that they don’t always just want to be talked at.
How might a mentoring plan for our young in the church look?
When talking about mentoring the young we really need to bring back the concept of calling and vocation.
The church must speak relevantly to the professional areas that these young people are called to fulfill.
They’re serving professionally in these different vocations. There is a lot of exposure that we can do between the generations on that issue of the workplace and calling and finding meaning in our work, and how God calls us into these things, and how does one operate effectively as a Christian businessperson, public servant, journalist or any other field. The idea of vocational discipleship is an important opportunity for the church.
I’m very motivated by the research to talk about vocation. We need to look at how young people are interested in culture and in movies and in their own career interest areas, whether it’s science, law or medicine. How can faith address their concerns and interests?
Do you see the digital age as a factor producing the present generation gap?
Yes, that is part of the growing generation gap — the digital age. But what’s interesting is that it’s not just young people that are at the front edge of that wave. So are many older adults.
The important distinction is to recognize that even though young people are more comfortable and conversant with technology, some of our research shows that parents of young children are just as addicted to technology, though in different ways.
And so, it’s not simply that young people are more digital than the rest of us. Facebook gives a good picture of the kind of technological challenges that we’re going to be in — that young people are the early adopters of technological practices that come to define how all of us as Christians will interact with our world.
How can we give young people a larger view of the Kingdom and how they might find their place in it?
We need to encourage them to be reading the right things and reading Scripture with the right framework.
One of the most important things that has helped me in my life with the Scripture has been the role of my minister, not just teaching about Scripture, but we meet about monthly, and we talk about a reading plan — not just to read so many chapters a day or so many verses a day, but he’ll ask me to read sections of Scripture and then read with a particular mindset.
We need a focused perspective in our mentoring, detailed and knowledgeable, but also trusting the intelligence that God’s put in these young people and their giftedness. So we’re not micromanaging, we’re not critiquing them, we’re not nagging them over the small details of their lives.
We want to be involved in those things, but we also want those young people to become capable, thriving human beings that are not codependent with us. We want them to be dependent on what God wants.

We want them to be partnering with what the Holy Spirit is asking them to do with their lives.
What do you see ahead for the church in the United States?
I believe it depends on what color of glasses you put on and whether you’re a person that sees the glass as half empty or half full.
Christianity is no longer the default religion of Americans, even though a majority of Americans still identify as Christians. There will be increasing skepticism — and in some cases hostility — toward people of faith and Christians in particular.
But I think, then, our response to that is, “Do we see those challenges as barriers or as opportunities for the Gospel to go forward?”
I believe that we have a short window of perhaps 10 to 20 years. All institutions are facing that kind of radical reinvention, from government to media, and churches are as well.
It really becomes a question of leadership — do we have the courage and imagination to help lead the Christian community forward through that?