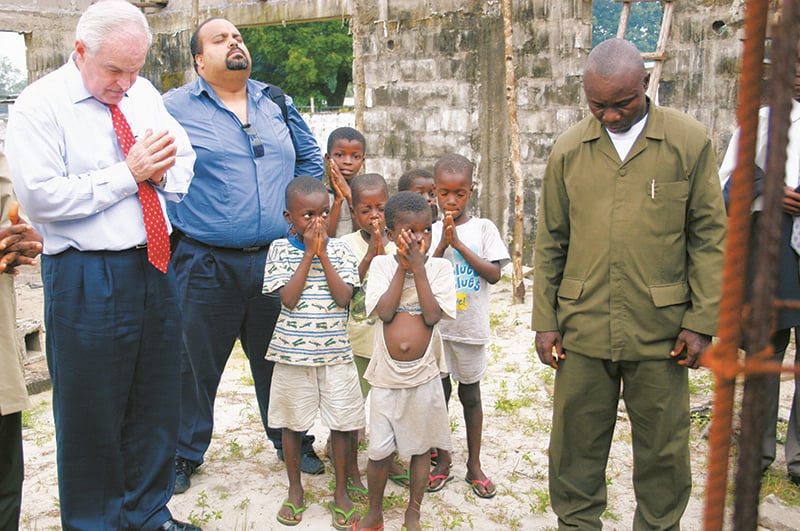 ‘A clash of fear and faith’

Stories of despair and hope abound among Churches of Christ in Guinea, Liberia and Sierra Leone — the focal points of West Africa’s Ebola outbreak.

Erik Tryggestad
President and CEO
Christians in West Africa are fighting the Ebola virus with prayer, radio waves and bleach.

In Guinea, one member of a Church of Christ died in the town of Gueckedou, an early epicenter of the outbreak, said Nestor Tonguino, a minister in the capital of Conakry. At least one church member lost a child to the virus. Another minister, Saa Tolno Philippe, has lost 12 relatives.
“Directly or indirectly, we have all been victimized,” Tonguino said. “This evil has greatly affected the church — in numbers and spiritually.”
Many church members refuse to shake hands when they attend worship services, he said.
Some don’t attend at all.
The outbreak stresses the need for Christians to share the Gospel while they can, said Francis Musa, another minister in Guinea. Church members call families grieving the loss of a loved one “and assure them of our prayers,” he said. Other faith groups offer bleach and cleaning supplies to victims’ families.
Christians have an “opportunity to build our own faith” by proclaiming “that God is the only protection,” he told The Christian Chronicle.
“Prayers for this epidemic are made every Sunday — and every weekday in homes,” he said.
In neighboring Liberia, “with our civil war behind us … we had once more begun to laugh” before the outbreak, said Maxwell J. Whea, minister for the Smythe Road Church of Christ in the capital, Monrovia. The conflict, which lasted 20 years, claimed at least 200,000 lives.
Church members are using their radio programs, supported by Louisiana-based World Radio Gospel Broadcasts, to teach Liberians about prevention and the Gospel, minister Isaac Daye said. Christians are using “the sword of the Spirit as our weapon to complement government efforts in defeating the enemy of our new war,” Daye said.
Recently, Daye presided over the graduation service for 35 students in the World Bible School program at the St. Paul Bridge Church of Christ.
A few hours into the ceremony, the crowd received news that four recent deaths in the community were due to Ebola. People began to panic, creating “a clash of fear and faith,” Daye said. But “our faith won” and the graduation continued, he added.
No church members are known to have died from Ebola in Liberia or neighboring Sierra Leone.
Jacob Sesay, a minister for a Church of Christ in Sierra Leone’s capital, Freetown, said that church members there are encouraged by the support they’ve received from Christians around the world.
“Your prayers are so important to us,” he told the Chronicle, “and we appeal that you continue to remember us in your prayers. … We now look to God Almighty to save us from this killer disease.”
RELATED COVERAGE
• The inside story of Dr. Kent Brantly’s decision to serve in Liberia
• ‘God has placed a call on all of us’ — see a transcript of Dr. Kent Brantly’s sermon