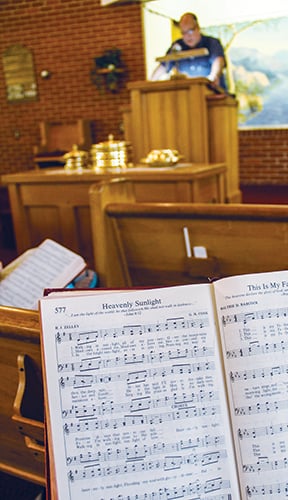 A church gets saved

Down to less than a dozen members, a congregation in rural Oklahoma faced death. Its minister prayed for God’s will, and the church found that it possessed the keys to growth.

So was his church.

The 27-year-old was “burned out, tired, frustrated and seeing no results,” he said, after nearly two years as part-time preacher for the Carnegie Church of Christ — his family’s home for three generations.

IN SMALL-TOWN AMERICA, Churches of Christ struggle to remain alive and vibrant in shrinking, rural communities. Find more Rural Redemption features.
In its heyday, the church in this dusty, western Oklahoma farm town of about 1,700 people boasted 120 souls in its pews. But that was the late 1970s. The church had declined ever since, said Marshall’s father, Greg.

By 2013, Sunday attendance was less than a dozen.

“I never dreamed we would ever get in the situation of having 10 to 12 people,” Greg Marshall said. “I’ll be honest, we were just sitting there kind of like we thought we were on an island. Everything got negative.”

The silver-haired saints who remained consoled themselves by saying, “No one wants to hear the Gospel,” and the like, Greg Marshall said. They talked about selling the building, buying a van and busing everyone to a church in Fort Cobb, about 11 miles east. 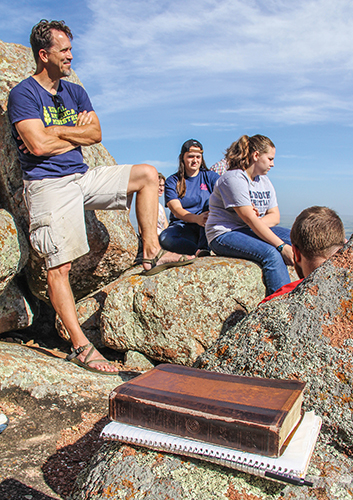 RELATED: Rural America Ministries sends missionaries to small-town USA.
The church could have been one more casualty of a shrinking fellowship. In the past quarter-century, Churches of Christ declined by 165,177 souls — or 9.8 percent — according to the 2015 edition of “Churches of Christ in the United States,” published by Nashville, Tenn.-based 21st Century Christian.
The 2015 directory lists 147 fewer Churches of Christ in the U.S. — 10 fewer in Oklahoma — than its previous edition in 2012, The Christian Chronicle reported recently.

Marshall’s wife, Margarite, remembers how disillusioned her husband had become in those darks days two years ago. Pregnant with their first child, she told him, ”Something’s got to give. Either you just quit and we go somewhere where we can get spiritually fulfilled and not aggravated … or we need to change it.”

“About that time,” she said, “God started opening all these doors and windows for us.”
FRUSTRATION, DREAD AND A PRAYER WALK
That first door wasn’t in the church building.

On a hot July afternoon in 2013, Jim Weaver strolled into Carnegie’s NAPA auto parts store, where Bryce Marshall works. It’s a family business opened by his grandfather 50 years ago.

Weaver had been all over town, asking folks who preached for the Church of Christ. His search led him here.

“I had no idea what he wanted.” Bryce Marshall said.

He asked Weaver to join him in the store’s office. 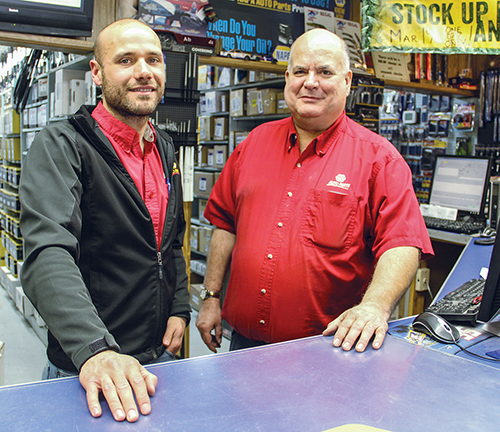 GENERATIONS OF FAITH: Bryce Marshall and his father, Greg, stand in the auto parts store Greg’s father opened in 1963 in Carnegie. As the Carnegie Church of Christ declined, Bryce became part of a youth group at a church in nearby Fort Cobb before leaving to study at Southwestern Oklahoma State University. There he met his wife, Margarite, a native of Lawrenceburg, Tenn. (PHOTO BY ERIK TRYGGESTAD)
“I’ve always been very conscientious about what people would think about me preaching,” he said. “I’ve never been a heathen or anything, but I’ve always felt like people might say, ‘Who are you to be a preacher? You’ve got no training. You’re just a regular guy.’”

He didn’t even know what to preach about on Sundays, he told Weaver, so he just focused on what he was going through in his life.

Weaver’s response: “You’re on track. That’s what people are looking for: relevance and honesty.”

Weaver, a member of the Oakcrest Church of Christ in Oklahoma City, once served as a missionary in Portugal. Now his mission field included the small towns of western Oklahoma. He founded a nonprofit, Rural America Ministries, to help churches reach and revitalize their communities through the Gospel.

The two agreed to stay in touch and talk about ways to revitalize the Carnegie church. In the months that followed, Weaver made regular visits and invited Bryce Marshall to lunch. 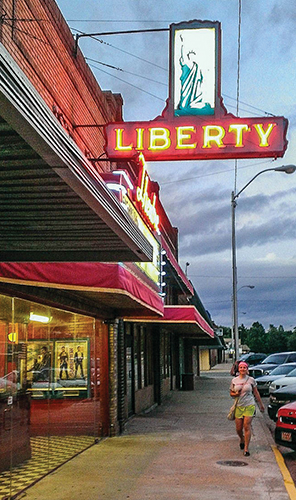 SMALL-TOWN HISTORY: A worker with Rural America Ministries walks past Carnegie’s Liberty Theatre. Opened in 1915, it’s the oldest continually operating theater in the state. (PHOTO BY JIM WEAVER)
At first, little changed. Margarite Marshall gave birth to their son, Kohen, and Bryce Marshall had to move his desk and the computer he used to write sermons into the laundry room of their rent house.

“I just got to where I loathed going in there,” Bryce Marshall said. The work took time away from his son. He also began to dread the text messages from Weaver inviting him to lunch. On one visit, in March of 2014, Weaver didn’t even want to eat. He just wanted to walk around the city park — and pray.

“And I’m thinking, ‘Are you kidding me? I haven’t eaten,’” Bryce Marshall recalled. “I’m walking around town, where everybody knows me, and they’re all looking at these guys who are just talking to thin air.”

Soon, he began to realize that “I was holding onto the Christian coma we had gotten into,” Bryce Marshall said. “We had the habit of huddling up together and patting ourselves on the back — ‘well, you’re doing good, you’ve figured it out, you go to the right church, you’ve been baptized’ — instead of just reaching out to everybody. It wasn’t looking like the New Testament church.”

By the end of the prayer walk, “I started letting go of the frustration” he said, “and accepting that maybe God had a little different plan for us.”

He did.
A YOUTH GROUP OF ONE
The Carnegie church’s revitalization didn’t start with a miraculous catch of new souls.

And it didn’t start on Sunday morning.

J.W. Prather, a member of the nearby Mountain View Church of Christ, was attending the Carnegie church’s Wednesday night Bible study because the start time, 7 p.m., was convenient. His daughter, son-in-law and 12-year-old grandson had recently been baptized and came along. 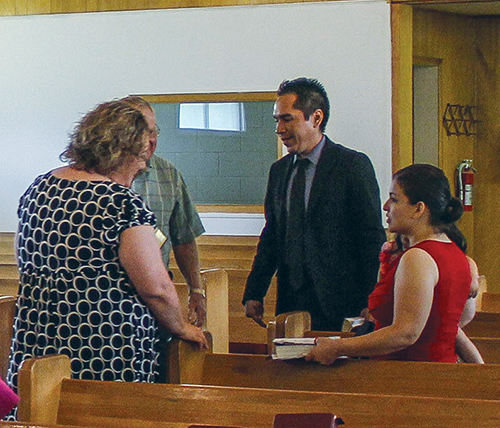 NEW FACES: Members of the Carnegie Church of Christ greet Juan and Nancy Orduna after Sunday worship. Juan, who grew up in Carnegie, said they used to attend a church in nearby Mountain View but started coming to the Carnegie church because of Bryce Marshall’s preaching and the church’s sense of family. (PHOTO BY ERIK TRYGGESTAD)

Margarite Marshall watched the grandson, Brennan, struggle to follow along with the adult Bible class.

“He was bored out of his mind,” she said, “so I talked to Bryce and said, ‘I’ve got to do something about this. He’s baptized. He’s got to be fed, too.’ So we started a Bible class for him.”

After a few weeks, a woman who had been visiting the Carnegie church brought her 7-year-old grandson, Julian, doubling the size of the youth class. Julian, his mother and his siblings had been attending a nearby Baptist church that offered pizza and games on Wednesday nights. But Julian loved Margarite Marshall’s class and begged to come back. Soon, his entire family was attending — and members of his extended family. The youth Bible class swelled to 11.

Three months prior, Bryce Marshall had considered canceling the church’s Wednesday night service, he said, “and now we had more on Wednesday night than we had on Sunday.”

After a few months, Julian’s mother, Julia Chavez, started bringing her family to Sunday morning services as well. Julian and his cousin, Alan, were baptized. Bryce Marshall asked Julia Chavez if she could sense a difference in her walk with God since she started attending. She said she could.

Why? “Because you guys speak from the Bible,” she said. “Your study and lessons are from the Bible, and that’s it.”
ADOPTING A COMMUNITY
As the Bible class grew, Jim Weaver and the Marshalls started looking for ways the Carnegie Church of Christ could reach out to its community. 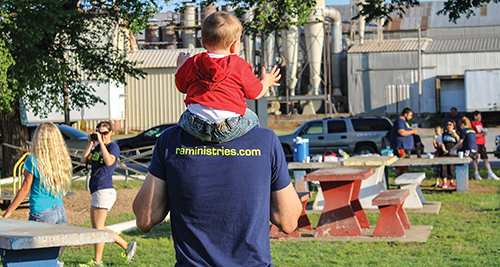 THE FUTURE OF THE CHURCH: Bryce Marshall carries his son, Kohen, during a community party hosted by the Carnegie Church of Christ and Rural America Ministries. Church members have learned that, to spread the Gospel, “you’ve just got to be brave,” said Marshall’s wife, Margarite. “I think Christians as a whole are just complacent, (thinking), ‘This is supposedly a Christian country. Everybody knows about God.’  Well, what do they know about God? Do they really know who Jesus is? Are you bringing him up in your everyday life?” (PHOTO BY STEVEN LANGLEY)

Later, the church hosted a fall festival in the park, with assistance from students at Oklahoma Christian University.

Margarite Marshall launched an “adopt-a-grandparent” program to connect the church’s influx of children with its senior saints. Now the excited children run into the church building and hug their adopted grandparents.

A new spirit of community exists in the congregation, she added, and with it has come baptisms and visitors. On a recent Sunday, attendance was 52.

Looking back, the couple sees God at work, bringing Weaver into their lives, challenging them to look for new opportunities — just as new souls began to show interest in the church.

“It could have been like every other time someone walked in those doors — they would have walked right out,” Bryce Marshall said. “But God had the timing all lined out to where, when that door was open, we were ready. We didn’t know it, but we were ready.”
A WONDERFUL PROBLEM
The future of the Carnegie Church of Christ is far from certain. On a summer Sunday, as Bryce and Margarite Marshall visited family in Texas, just a handful of old souls gathered in the pews for Sunday morning Bible class.

Afterward, longtime members including Walter Owens and Ninalea Davis talked about the church’s recent growth. They pray it will last.

“We’ve got some young folks real interested,” said Owens, age 88. “That’s a start.”
As Greg Marshall led hymns from a well-worn copy of “Sacred Selections for the Church,” a few more souls drifted in, including Juan and Nancy Orduna. They started attending recently and love the church’s preaching and fellowship, Juan Orduna said.

John Pickens, a visiting minster from Edmond, Okla., preached about the importance of baptism.

“Y’all need to get some water in your baptistery,” he said, glancing behind him from the pulpit, “because you never know when you’re going to need to baptize someone.”

In the small auditorium, everyone noticed. And no one minded.

After decades of decline, Greg Marshall said, “It’s a wonderful thing to have the problem of kids making noise.”