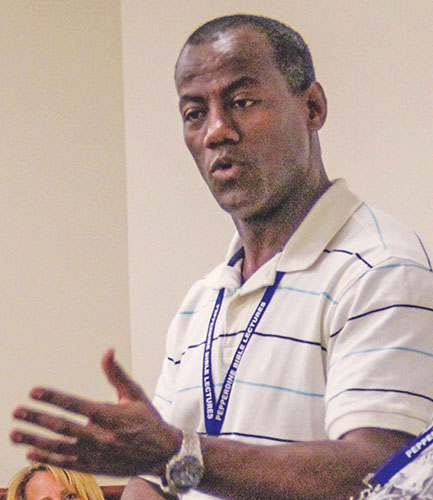 A believer from the ‘boondocks’ gives back

Habtu Zemech talks about converting from Islam, serving his native Ethiopia and the lessons of country music

Erik Tryggestad
President and CEO
WOODBRIDGE, Va. — Habtu Zemech is living the American dream. The Ethiopian native has a house in the suburbs of Washington, D.C., a loving wife, Meaza, two children and a job as program manager for a government contractor at the United States Patent and Trademark Office.

In Ethiopia, “Kenny Rogers, Don Williams and Dolly Parton are very famous,” says Zemech as he sits at his dining room table, reviewing financial records for the domestic missions of The Church of Christ in Falls Church, Va., where he serves as deacon of missions. He particularly likes the lyrics to “Boondocks” by Little Big Town, ”I feel no shame, I’m proud of where I came from. I was born and raised in the boondocks.”

Born into a Muslim family, he studied the Bible with the Makinisa Church of Christ in Ethiopia’s capital, Addis Ababa. He was baptized, became a preacher for the Addis Ababa Church of Christ and later worked in well-drilling and relief ministry. He earned a diploma in Bible and missions from Nairobi Great Commission School in Kenya and served Ethiopian refugees there.

He moved to the U.S. in 1996 to further his studies in ministry, intending to return to Ethiopia. Those plans fell apart, and he instead earned a master’s in project management from George Washington University and became a U.S. citizen.

But his faith, his upbringing and country music lyrics wouldn’t let him forget Ethiopia.

He launched a nonprofit, My Neighbors, to provide school fees, supplies, uniforms, medical care, food and clothing to orphans and impoverished children in Ethiopia.

“As one born and raised in Ethiopia, I was a part of this community and lived in the same or worse situations than most of them,” he says. “I am a living witness that, when good people strive to make a difference in the lives of others by recognizing the needs, they change lives in positive ways.”
You grew up in a Muslim family. How did you become a Christian?

When I was in high school, I had a friend who was a member of the church. He used to take me to the church compound to play volleyball.

Eventually my friend and (minister) Behailu Abebe got a hold of me and they started talking about the Bible.  Slowly but surely they put me into that habit of studying the Bible. Then in March 1984 I got baptized. I was 18.
What convinced you to convert?

After I became a Christian, I wasn’t just put to the side. When I was called to serve, then I was really thrilled about it.
How did your family react?

At first, my dad didn’t know. My mom knew and she kind of shielded me from trouble.

My grandfather was an imam in the mosque. He was really unhappy with me. He wanted me to follow in his footsteps. When that didn’t happen, it didn’t fly well with him.

Later on in life, though, what he had seen in me and what my mom was telling him — and, mostly, me becoming independent — seemed to make him see that, OK, I am not “good for nothing.”
Were Muslims and Christians pretty friendly with each other?

We lived together for decades with no problem. We would eat in their houses and they ate in ours. When we had a wedding, we invited Christians. Muslims and Christians married and became close friends.

Just recently — it might be due to terrorist acts or to some people motivated by some kind of benefits that they receive — (there is) tension between Muslims and Christians. It’s completely a different world right now.
My Neighbors was born out of a trip you and your family took to Ethiopia in 2007. What happened?

I made it a point to go and visit the people that I had not seen for a long time — my neighbors, friends that I used to play soccer with, friends I used to study the Bible with.

Most who were in a position to help me when I was growing up — middle-class, well-to-do people — had deteriorated and were living in a very, very bad situation.

A brother who is highly respected in the church pulled me to the side and said, “Habtu, I know you went to the States. I know that you live a good life there. But I am praying for God to make you like Moses.”

You know Moses, he grew up in the poorest family and God pulled him up because he wanted to rescue his people. God didn’t want Moses to live a comfortable life (in Egypt).

“That’s my prayer for you,” this man said. “I don’t want you to live a comfortable life in America and forget about us here.”

It was just like a spark. I talked to my wife and said, “I cannot sit here, live the kind of life that I’m living and ignore those people. If it means whatever money that I have, taking from my 401k, I’d like to do something.”

When I first came to the States, I had a pair of pants, one shirt and a pair of socks. But the Lord has blessed me beyond measure. I went to school, I got a really good job.

My calling — I know it — is not solely to live for myself.

My calling is to do everything that I can based on what God allows me to do, to go out and share the blessings, the salvation that I have received, to share with other people.
What do you wish American Christians understood about Africa — and African Christians about America?

There is a lot of knowledge in Africa, even with people who never had any kind of academic study. But I think the key is, how do you tap into that and use it to grow the church?

Often we Africans view America based on what we get from the media — Hollywood, New York, Chicago, San Francisco, Los Angeles, skyscrapers and all that. You don’t see trees. For Americans, we often view Africa through the media — wilderness, wildlife, drought, huts. We don’t see the buildings.

I think open-mindedness and trust would be the two things that I would say to anyone. Whatever sky you see here — with the stars and everything — you can see that same sky in Africa.