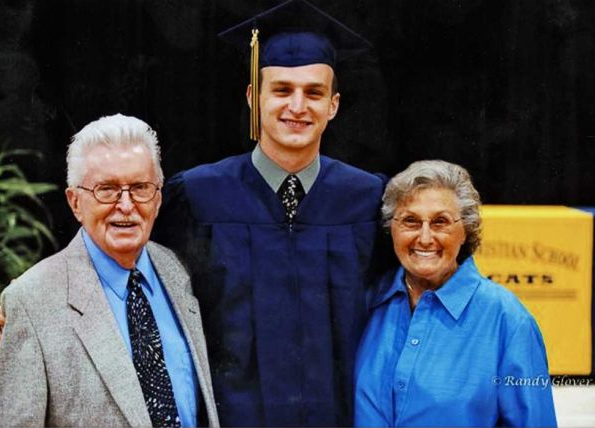 
Marie Gage, an 82-year-old member of the Westbury Church of Christ in Houston, was robbed and killed in her home Thursday night.
Her husband, Bill, 84, a fellow Westbury member, survived the attack.

Bill and Marie Gage, in a family picture. (Photo via Houston Chronicle, www.chron.com)

The couple’s daughter Loa Glenn tells Houston-area media that the family relies on its faith and knows God has a plan. Loa’s husband, Greg Glenn, is head of school at Westbury Christian School, next to the church.
Marie Gage’s “wonderful family is hurting but knows she is with the Lord,” Westbury Christian School Bible teacher Steve Hawley wrote on his Facebook page. Hawley paid tribute to the Gages in a special post on his blog.
A front-page Houston Chronicle story today provides details of the crime:

Marie Gage often wore unique jewelry that stood out, including a 4-carat diamond wedding ring and 3-carat pendant necklace.
Police believe that her jewelry may have caught the eye of a man who decided to follow Gage, 82, home and later rob her.
She and her 84-year-old husband, Bill, were beaten and kicked by the man after he forced his way into the retired couple’s southwest Houston home about 8:45 p.m. Thursday. Marie Gage died from the attack.
The robber stole her wedding ring and a pendant necklace along with two other rings, one topaz and the other sapphire, then fled the home in the 5700 block of Sanford, said HPD homicide Sgt. C. Elliot.
“It was not a random act,” said Elliot, calling Gage’s death “senseless.”