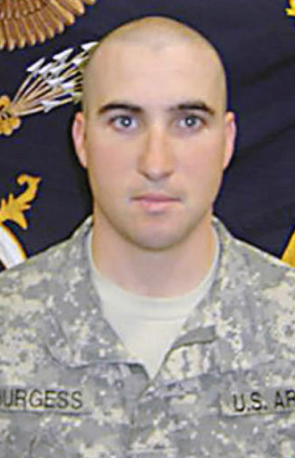 A retired postal worker, 80-year-old Chal Burgess said he is not financially able to make many donations.
However, Burgess recently sent a $10 check to The Christian Chronicle to help support the newspaper’s mission of informing, inspiring and uniting Churches of Christ.
A member of the Clyde Church of Christ in Texas, the longtime Christian made the.gif?Action=thumbnail&Width=460&algorithm=proportionalt in memory of his late grandson, Army Staff Sgt. Bryan A. Burgess, who died March 29 while serving in Afghanistan. (The Chronicle does not release information concerning donors, but Burgess gave his permission.)
“I tell you, it’s devastating,” Chal Burgess said of his only grandson’s death. “But we knew what he was doing and that it was possible at any time. The sad thing is, he had only 26 days left on his third tour.”
Bryan Burgess had served two tours in Iraq and a third in Afghanistan, his grandfather said.
“He was very dedicated to serving his country,” Chal Burgess said.
The staff sergeant, who grew up in Cleburne, Texas, also was a faithful Christian. “He obeyed the Gospel there (in Cleburne) and attended there until he went into the service,” Chal Burgess said.
The Fort Worth Star-Telegram reported that Bryan Burgess grew up in the Granbury Street Church of Christ in Cleburne and was a regular in the youth group there throughout his school years:

“Ev­eryone was in shock,” said Cleburne Mayor Justin Hewlett, a member of the church. “He was a great young man, very vibrant and out­go­ing.”
Hewlett said he had not seen Sgt. Burgess in some time but that he heard from his son about him.
“I was talking to my son, who is in the Special Forces at Fort Bragg,” Hewlett said. “Bryan had con­tacted him sev­eral months ago about what it would take to get into the Special Forces.”

At one time, Bryan Burgess had aspired to be a preacher, his grandfather said. But he decided to join the military instead.