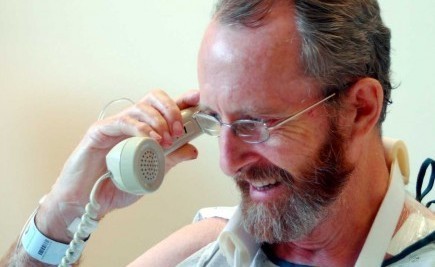 The year in quotes.

Erik Tryggestad and Bobby Ross Jr.
Worry and concern characterized 2009 — worry generated by declining church membership in the United States, Christian school closings and a global financial crisis.
But the quotes of 2009 also reflect hope for the future — hope born from the belief that God is in control.
Here are The Christian Chronicle staff’s favorite quotes of the year.
“I was totally relaxed. I thought, ‘Well, I’ve always believed in God. I believe this world is just a transient place.’ There was no need to worry.”
— DR. ROBERT WHITTAKER, a medical missionary, on being abducted from his home in Nigeria.

“I was longhaired, smelled like cigarette smoke, prideful, arrogant, condescending, not a pleasant person to be around. They just loved me, warts and all.”
— WES WOODELL, on how the campus ministry group at the Bay Area church in Tampa, Fla., helped turn around his life.

“Africa is hungering and thirsting, weeping and mourning. Jesus says they are blessed. So they receive the message of Christ. … In the West, we are fat and full, and we have everything a people could need. And the church is dying in our laps.”
— WENDELL BROOM, veteran missionary to Nigeria.

“So often, we’re just Sunday morning Christians. This really is a concrete way to make a difference and to reach the lost.”
— CHRISTINA HEATER, a member of the Dalton Gardens church in Coeur d’Alene, Idaho, church, on hosting homeless families overnight at the church building.

“Financially, we’re struggling. But we’ve told people that very honestly.”
— RUBEL SHELLY, president of Rochester College in Michigan, on a U.S. Education Department analysis that deemed the college in fragile financial condition.
“Relax, these people aren’t like other people. They’re with God. They’re not going to ask you to buy some crack or anything.”
— TERRY LaVALLIE, a recovering drug addict, trying to make her husband, Rynell, feel comfortable about their first Sunday with the Calgary, Alberta, church, where they were later baptized.

“I hoped for this day, but I never thought that I would see it. This means that God is on the throne.”
— EMMA MOTEN, a member of the East Capitol Street church in Washington, D.C., on Barack Obama’s inauguration as the nation’s first black president.

“This is how it’s going to be in heaven.”
— JEAN VOLCY, a church elder and immigrant from Haiti, on the Strathmore Boulevard church in Toronto, where Christians representing 32 nationalities assemble each Sunday.

“It’s great to belong to a Church of Christ, but frankly, if I were hunting for a church after college … I would have other requirements as well. I guess I just don’t understand the significance of it like the previous generations seem to.”
— JESSICA SCHILDT, 16, on teen Christians and “brand loyalty” to Churches of Christ.

“There is not a drummer, guitarist or pianist in the world that could have made those songs any more meaningful to me.”
— KEN BROWN, a member of the Echo Lake church in Westfield, N.J., on an a cappella worship assembly at Harlem’s historic Apollo Theater.

“People are going to heaven because of Melissa. She has been quite evangelistic.”
— ED WOODHOUSE, on his 18-year-old granddaughter, who was born with Smith-Magenis syndrome and inspired creation of a ministry for children with special needs at the Brooks Avenue church in Raleigh, N.C.
“Truly, it was history in the making — an event that only the mightiest of gods could orchestrate.”
— GIGIE CARRANZA, describing the Asia Mission Forum in Beijing.

“I was taught at an early age the way I was supposed to act and treat others, and there was never really any acceptance of anything less.”
— COLT McCOY, quarterback for the University of Texas football team and member of the Westover Hills church in Austin, Texas.

“See, you died and now you’re up walking again!”
— BALONDON SOMÉ, a Christian in the African nation of Burkina Faso, shouting to new converts as they
emerged from a pond after baptism.
“I don’t know that I’ve ever experienced as eerie and as unmistakable a sign of God’s eminent activity as that.”
— BRIAN SIMMONS, professor at Cascade College in Portland, Ore., on the thunder and dark skies that accompanied the college’s final graduation ceremony.

“God says ‘Go,’ and it’s almost as if we’ve been unwilling to do that. So God says, ‘OK, I’ll bring other nations to you now.”
— JEREMIE BELLER, minister for the Wilshire Church of Christ in Oklahoma City, on his congregation’s
relationship with Sudanese refugee Andrew Konda.

“As students on campus see that we care about social justice, they want to see what makes us care. Then we hit them with the Jesus stick.”
— CONNIE NORWOOD, a member of the Campus View church in Athens, Ga., about her congregation’s campus ministry.

“Why do we need a ‘destination’ in mind when we go on a mission trip? Who knows what opportunities we have missed while driving to where we were headed?”
— JOSH JONES, youth minister for the University Church of Christ in Denver, who accompanied 13 youths
on a “mission trip to nowhere.”

“To say you’re going to take a mission trip to Kenya is kind of an oxymoron these days. You have to say, ‘I’m going to go get revived in Kenya.’”
— DYRON DAUGHRITY, assistant professor of religion at Pepperdine University in Malibu, Calif.

“Why does God see fit to save my husband with only minor injuries — although I am eternally grateful to him for doing so — and allow three young girls to die instead?”
— JULIE MARCUM, missionary whose husband was injured in a bus crash that claimed three church youth group members’ lives in Bolivia.

“Why are thousands of people looking online — and finding answers — and not looking in the church building? We must critically contemplate this question.”
— LANCE TOLAR, technology consultant for World Bible School, on the ministry’s unprecedented
number of online students in the U.S.

“I knew God was in control and that if something were to happen, I would be in a better place.”
— CAROLINE PRICE, a student at Lipscomb University, on going on a spring break mission trip to a Mexican orphanage, despite concerns about border violence.

“When we all get to heaven, you know we’re all going to speak one language — Quechua.”
— JUAN GUAMAN, minister for a Quechua-speaking church in San Bartolo, Ecuador.

“I would get up for school, and there would be two or three people asleep on the couch, their wet clothes over a chair. At some point Dad had baptized them in the river near our house.”
— ALAN ROBERTSON, describing the ministry of his parents, “Duck Commander” Phil and Kay Robertson.

“It is truly a cacophony of sound — more like a joyful noise — but it always brings a smile to everyone’s face.”
— MATT BUSH, worship minister for the Culver Palms church in Los Angeles, on singing “Bind us Together” simultaneously in English, Spanish, Korean and Chinese.

“You can’t beat a happy ending. No one got hurt, everyone will be back home safe and sound, and I got a chance to see some whales.”
— DON WINNER, a private pilot who spent hours off the coast of Panama looking for a group of missionaries lost at sea — only to learn that they were neither lost nor at sea.